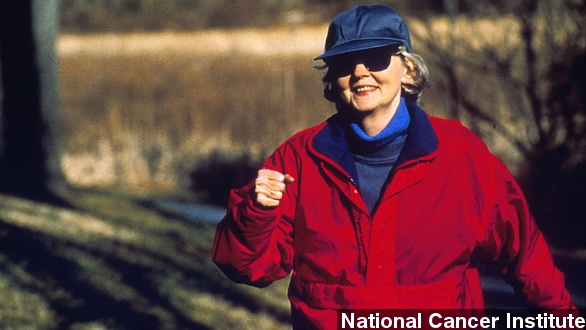 A recent study out of France found even a small amount of regular exercise, like walking, can help postmenopausal women cut their risk for breast cancer.

WPTV: "The study followed postmenopausal women who walked at least four hours a week over the past four years. Their risk of breast cancer was 10 percent less than when we exercise less."

Specifically, more than 59,000 postmenopausal women in France were observed for an average of eight and a half years.

Now, it's definitely not a secret that exercise is good for your health, and it's long been known to be beneficial when it comes to fighting breast cancer.

The National Cancer Institute even names exercise as a "protective" activity.

Which is why Alison Estabrook, the chief of the division of breast surgery at two New York City hospitals, told HealthDay​ she's too not surprised by the findings.

"As a breast cancer surgeon, one of my roles is to discuss prevention strategies for women. ... Exercise is certainly one prevention strategy I discuss for many reasons, and this study emphasizes the importance of physical activity."​​

But in the press release on the study, published in the journal Cancer Epidemiology, Biomarkers & Prevention, the lead researcher explained what exactly sets apart these findings from the rest.

WOWT: "The key is keeping up with that exercise. The women who walked earlier in life but stopped later had no decreased risk for that disease."

It's important to keep in mind factors like weight and fat index were not considered in the study.