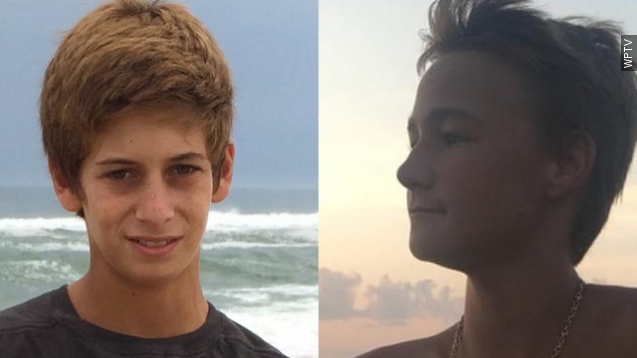 SMS
Life Jackets May Provide Clue To Fate Of Missing Fla. Teens
By Jake Godin
By Jake Godin
August 6, 2015
Life jackets discovered off the coast of Georgia may provide clues to the fate of two missing Florida teens if confirmed to have belonged to them.
SHOW TRANSCRIPT

The search for Perry Cohen and Austin Stephanos continues.

Heli Aviation, a Florida-based aviation group has discovered a pair of orange life jackets found off the coast of Georgia. It hasn't been confirmed whether the jackets belong to the two teens who disappeared off the coast of Florida in July.

"It was sitting above on sea grass. It stuck out from the other debris that was around because it was newer and it didn't look like it had as much fade as anything else," Heli Aviation's Rachel Trimpe told WFLA.

WFLA reports the jackets are now being analyzed to figure out if they belong to the missing teens. A K9 search and rescue team has been sent to look for more evidence in the area.

Two days after the 14-year-old boys disappeared, the U.S. Coast Guard discovered their boat off the coast of northern Florida.

But after searching over 49,000 nautical miles over the span of more than a week, the U.S. Coast Guard suspended its efforts to find the boys. (Video via U.S. Coast Guard)

"So the decision to suspend was excruciating and gut-wrenching for me personally," said Capt. Mark Fedor.

Along with life jackets, other items missing from the boys' boat include a 35-quart Yeti cooler, a recently painted engine cover, a translucent Plano tackle box and a pair of white Royal brand fishing boots.

Together, the families of Cohen and Stephanos have raised almost $480,000 in donations using a GoFundMe page to assist in search and rescue efforts.