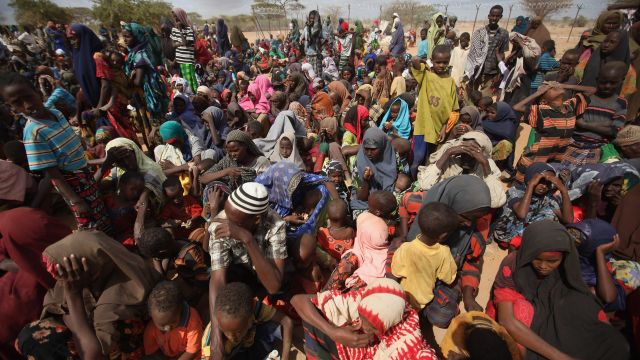 The Dadaab refugee camp is the largest in the world.

"About 100,000 refugees came over the border from Somalia to Kenya, and the U.N. set up a camp for them. Over time, more and more people have come as the civil war has not ended. Those people who were originally there have reproduced, they've had children, more people have come from Ethiopia, from Sudan, and now the population is pushing 400,000," Rawlence said.

If Dadaab were a city, it would be Kenya's third largest.

"A city is the best way to think about it. Because although it was originally a camp, it has evolved now into these five connected suburbs with hospitals, with schools, with hotels, restaurants, soccer leagues, cinemas, all this different stuff," Rawlence said.

"It's a city that exists on food aid, that's run by the U.N., and therefore you have U.N. staff who are paid international wages with their danger money and all sorts of allowances, and they're sometimes making up to $9,000 a month. And next to them are volunteers from the refugee camp that are being paid a stipend of $70, $80 or $90 a month.

"Conditions are bad. The default for everybody is food rations from the U.N., which are dispensed every two weeks, and that is just enough food to keep you alive. With the Syrian crisis, the rations have been cut, so some people are actually going hungry.

"Then of course you've got the rains, the sanitation, there's no permanent plumbing. Every rainy season there's cholera. At the moment there's about 1,000 people infected with cholera in the camp. In a way, it's a humanitarian emergency all on its own.

"The official Kenyan view of the government is that it wants Dadaab to disappear. It wants to bulldoze the camp; it wants all those people to go back to Somalia. When you put people somewhere, they're going to put down roots, they're going to make a city that works, and it's going to be very hard to uproot it.

"You can't just wipe a city the size of New Orleans off the face of the map. These people are not going to go anywhere.

"Dadaab is the biggest refugee camp in the world, but it's one of many. And there are many other examples of this, where these temporary places have become permanent, where people are living for generations.

"Look at Gaza. It's a city that's now 5 million people; it's existed for 60 years. There are a network of camps in Chad full of refugees from Darfur; there are now three generations growing up in camps on the border between Thailand and Burma. There are many more in Ethiopia, Yemen, Sudan. This is a global problem.

"There are 14 million protracted refugees around the world, all living in these kind of temporary cities, and we need to accept that actually they're not temporary. They're permanent," Rawlence said.

This video includes clips from U.N. High Commissioner for Refugees, CBC, and UNICEF and images from Getty Images and Ben Rawlence.