Life After The Triple Crown: American Pharoah Set To Retire 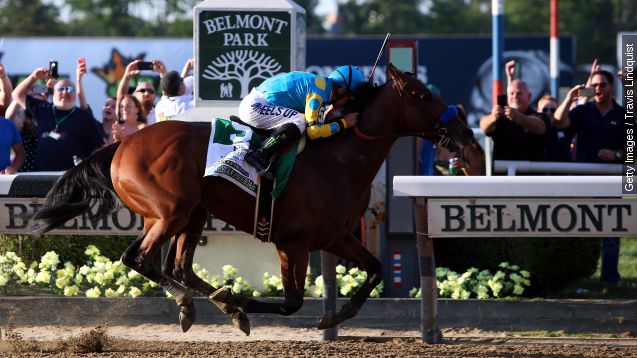 American Pharoah made history Saturday, becoming the 12th Triple Crown winner and the first since 1978. (Video via NYRA TV)

But unlike other sports champions, don't expect him to be heading to Disney World.

No, instead American Pharoah will celebrate his victory in open fields, doing whatever horses do. Retiring at three years old doesn't sound too bad.

American Pharoah's future is still up in the air, but one thing is for certain — retirement isn't far off.

According to multiple reports, the Belmont Stakes won't be American Pharoah's last race, but 2015 could be his last year.

Owner Ahmed Zayat told reporters he wants to keep American Pharoah on the racetrack but wants trainer Bob Baffert's blessing to do so. Zayat said, "We need to enjoy our stars as long as we can. Retire at the end of this year."

Zayat only has about six months left with Pharoah, though. As the New York Post points out, "[American Pharoah's] breeding rights already have been sold to Coolmore Stud for at least $15 million which means at the start of 2016, Coolmore, not owner Ahmed Zayat, will call the shots."

Pharoah will at some point be shipped to Kentucky where Coolmore Stud's American operations are based. From there, it's breeding season and a lot of it.

Forbes explains horses average about 100 mares a year for three to four years. Still, some can book up to 150 per year in that time frame and, at a stud fee of about $100,000 per foal, the offspring and money can rack up quickly.

For perspective, WNBC reported in 2013 that 2004 Kentucky Derby and Preakness Stakes winner Smarty Jones had sired 418 foals in seven years.

The New York Post says if American Pharoah does continue to race, it will likely be in the nearby area with the Haskell Invitational Aug. 2 as one of the most likely suitors.