Libya's UN-Brokered Unity Deal Could Fragment The Country Even More 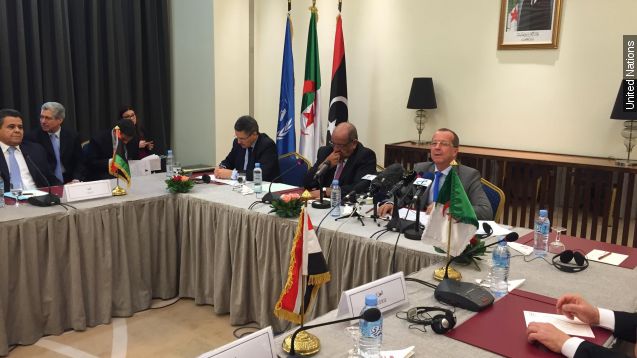 SMS
Libya's UN-Brokered Unity Deal Could Fragment The Country Even More
By Jake Godin
By Jake Godin
December 17, 2015
Libya's rival parliaments have agreed to a U.N.-brokered unity deal in Morocco, but there's one problem: Some parliament members don't want it.
SHOW TRANSCRIPT

The heads of those rival parliaments never agreed to the deal. (Videos via Sky News & New General National Congress)

One parliament, affiliated with the Muslim Brotherhood, sits in Libya's de facto capital, Tripoli, in the west.

The other sits in Tobruk in the east. Unlike the former, this one's internationally recognized.

And right in the middle of both lies Sirte, a city controlled by ISIS.

Ideally, a unity government would allow Libya to concentrate on rooting out the ISIS presence, which has only gotten stronger in the power vacuum left by Libya's crisis. (Video via Libyan Armed Forces)

The U.N. deal means the rivals will have to come together to form a unity government. But, with stubborn politicians on both sides, some note the deal could actually make things worse — essentially splitting the government into three parts rather than two.

Now that the deal has been signed, Libya will have 30 days to form the unity government using members of parliament who are willing to go along with it. (Video via Al Jazeera)

This video includes an image from Getty Images and music from "nesting" by Birocratic / CC BY 3.0.