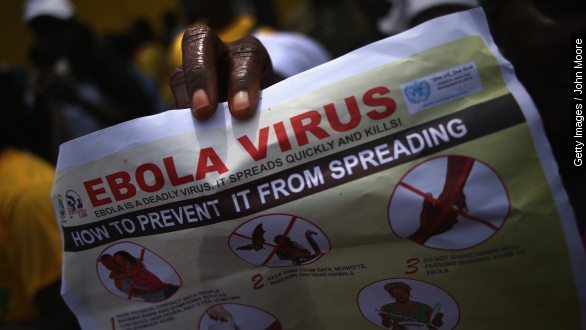 SMS
Liberia Is Ebola Free But West Africa Still Has Work To Do
By Ben Lawson
By Ben Lawson
May 9, 2015
The World Health Organization has declared that the Ebola outbreak in Liberia is over but West Africa still isn't out of the woods yet.
SHOW TRANSCRIPT

The World Health Organization has declared the outbreak of Ebola in Liberia is over.

It was once the nation hit hardest by the disease. More than 4,700 Liberians lost their lives during the outbreak. During the peak of the epidemic, flights were cancelled into the country, fuel and food supplies ran low and schools, businesses and borders were closed.

But now it's been 42 days since a case of Ebola was confirmed in Liberia. That's twice the normal incubation period for the disease.

But West Africa, and that includes Liberia, isn't out of the woods just yet. Guinea and Sierra Leone are still reporting new cases of the disease. Both countries reported nine cases for the week ending May 3. (Video via World Health Organization)

That's a far cry from the 300 to 400 fresh cases Liberia was reporting on a weekly basis in August and September at the peak of the outbreak, but it is a sign that the disease is still spreading, and could spill over into Liberia again if it isn't properly managed.

Plus, there is a lot researchers are still discovering about how long Ebola can remain in a person's body.

On May 1 the Centers for Disease Control and Prevention issued a warning that male Ebola survivors should use a condom during sex indefinitely.

That's because a woman became infected with the disease after having intercourse with a man who had overcome the virus five months before. It was previously thought that Ebola could survive in semen for about three months.

And The New England Journal of Medicine detailed a case on Thursday of an American doctor who survived the disease but found the virus was still present in his eye more than a month after leaving the hospital. (Video via World Affairs Council)

So researchers are still learning about how Ebola can continue to spread through survivors of the disease, and it isn't completely out of West Africa just yet. But the announcement of an Ebola-free Liberia is still cause for some celebration.

Liberia's economy took a big blow during the epidemic with many foreign companies pulling out of the country. Now that the worst seems to be over, Liberia can work on building their economy back up. (Video via CBS)