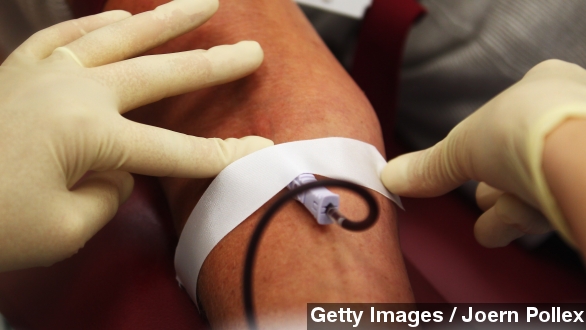 The agency said in a press release it recommends changing the blood donor policy "for men who have sex with men from indefinite deferral to one year since the last sexual contact." That means gay men who've been celibate for a year would be able to donate blood.

The FDA says its recommendation to reconsider the ban comes after a review of newer scientific evidence, although the release doesn't say what evidence led to the change.

The National Gay Blood Drive, an ongoing campaign where gay men who want to donate blood bring a proxy to do so, hailed the decision as a step toward removing what many believe is a discriminatory policy.

But that organization and other advocacy groups say the FDAs recommendation fails at removing stigmas around gay men. Advocacy groups like the ACLU, the Human Rights Campaign and Gay Men's Health Crisis released statements criticizing the FDA's stance.

A writer for Gizmodo says, "This policy sends the message that the problem is inherently with being gay, rather than engaging risky sex practices. This is prejudice shining through."

The blood donation ban for gay and bisexual men stems from the AIDS epidemic in the early '80s. The FDA implemented the ban, claiming men who have sex with men are at a greater risk of contracting or transmitting certain diseases — like H.I.V.

As NBC explains, the science at the time wasn't sophisticated enough to detect H.I.V. in blood or plasma. As a result, hemophiliacs — people with blood that doesn't clot — received infected blood through much-needed blood transfusions.

If the FDA's advice is followed, the U.S. will fall in line with the many countries who already allow blood donations from gay men. That includes Australia, Britain and Japan. So far, the change is still just a recommendation, although it could be put in place sometime next year.