LGBT Issues Overshadow Pope's Opening Of Synod On The Family 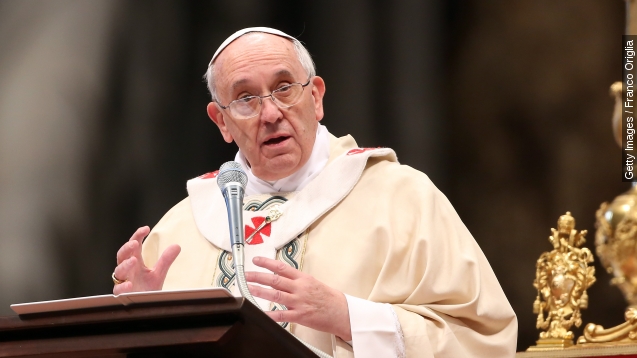 SMS
LGBT Issues Overshadow Pope's Opening Of Synod On The Family
By Sebastian Martinez
By Sebastian Martinez
October 4, 2015
A Catholic priest came out as gay, and LGBT issues are now linked to the church's synod that focuses on the family — whether the pope likes it or not.
SHOW TRANSCRIPT

The Synod of Bishops on the family opened Sunday. (Video via Vatican)

But family isn't the focus of coverage so far.

Whether Pope Francis likes it or not, the latest meeting of bishops on the family is being overshadowed by LGBT issues in the church.

First, through news of his private meeting with Kentucky clerk Kim Davis. The Vatican later distanced itself from her and said the meeting wasn't an endorsement of her position. (Video via CNN)

Francis also met with an openly gay former student of his while in the U.S.

"Every homosexual person is son of god," priest Krysztof Charamsa told the BBC.

And then there was the Polish priest who came out as gay and was quickly relieved of most of his duties.

Considering the pope has tried to make the church more accepting of the LGBT community, this all makes it harder for him to get the synod on message. (Video via ABC)

But that message is kind of wide-ranging anyway, as John L. Allen writes for Crux: "When he talks about threats to the family, he typically takes a much broader view, including many other forces: unemployment, war, environmental calamities, a culture of exaggerated individualism and consumerism, neglect of both children and the elderly, and so on."

Within the church, those issues are much less divisive than the LGBT community. (Video via Rome Reports)

But this isn't a new problem for Pope Francis. Last year's synod on the family saw similar divides over LGBT issues and divorce.