Leveled Ruins In Palmyra, Syria, Are Rising From The Dead 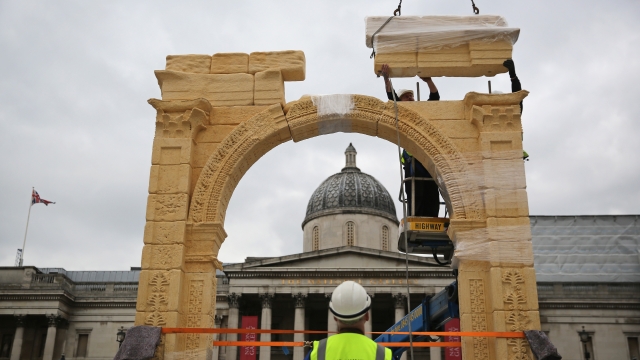 The ancient Arch of Triumph, which once stood in Palmyra, Syria, now has a 20-foot tall, 3-D replica in London's Trafalgar Square.

Last year, ISIS destroyed the arch, along with a slew of other artifacts.

An archaeologist told NPR the model, which is two-thirds the size of the real thing, is "indistinguishable from the original."

"I think this may be the most exact reproduction of any structure ever made," archaeologist Roger Michel told BBC.

The replica was constructed by experts at the Institute of Digital Archeology using new technology that turns pictures into 3-D models.

But further plans to relocate this replica from London to Palmyra has critics worried that might change the "historical meaning" of the ancient site.

Still, the director of a project working to digitally recreate the destroyed city says he's happy about the conversations surrounding the arch and Palmyra. He said: "Anything that keeps attention on this space, I'm fine with. At least it's keeping this alive in a different way."

ISIS took control of Palmyra in May last year, but in March 2016, the Syrian government recaptured the city with the help of the Russian Army and various militias. Archaeologists have said they want to restore some of the less damaged artifacts, but dangers, like land mines, still linger there.

This video includes clips from CNN, RT, The Institute for Digital Archaeology and France 24 and images from Getty Images.