Letters From Old Yankee Stadium Going Up For Auction 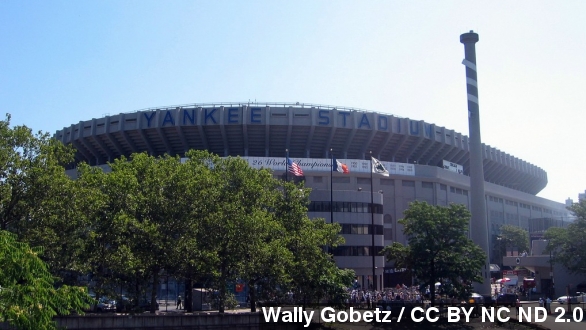 Any baseball fans in the audience? Here's one auction you're not going to want to miss.

The blue letters that adorned New York's old Yankee Stadium are up for sale. (Video Via Fox News)

The 13 letters were first placed on the outside of the stadium in 1976. They were taken down 32 years later when Yankee Stadium was demolished in 2008.

The letters measure 10 feet tall and between 2 to 10 feet wide.

Yankees great Reggie Jackson purchased the letters after they were removed. The Hall of Famer earned the nickname Mr. October by hitting three home runs in Game 6 of the 1977 World Series at Yankee Stadium — only a year after the letters went up.

New York Post reports Reggie purchased the letters along with a set of stadium seats, the batter's backdrop and his old locker.

Now, Jackson is teaming up with Sotheby's to sell the letters.

In its description of the auction lot, Sotheby's reminds potential bidders that the letters adorned the stadium during "six of the Yankees record breaking 27 World Series Championships; the only two Perfect Games thrown by New York Yankees pitchers to date, as well as their historic 1998 season when they recorded 125 wins."

ESPN analyst Keith Olbermann isn't real confident the lot, which is comprised of all 13 letters, will sell.

"The market for them appears to be Reggie Jackson and me, and I already turned them down six years ago," Olbermann said.

Sotheby's is predicting the lot could sell for as much as $600,000 when it hits the auction block April 1.