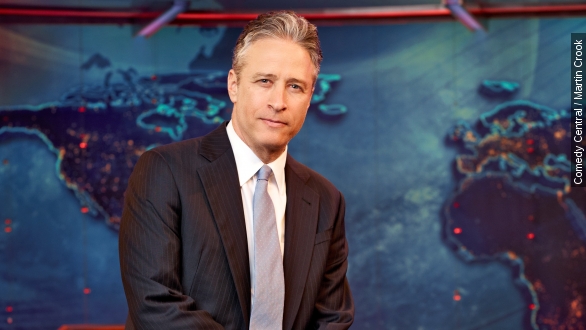 SMS
Less 'Satisfaction': Why Jon Stewart Is Leaving 'Daily Show'
By Matt Moreno
By Matt Moreno
April 19, 2015
In an interview with The Guardian, Jon Stewart said the upcoming election and "not getting the same satisfaction" were reasons he's leaving the show.
SHOW TRANSCRIPT

For the man who's interviewed countless political candidates and covered four presidential elections, a fifth election season just doesn't carry the same excitement as it once did.

Jon Stewart, the soon-to-be former host of Comedy Central's "The Daily Show," opened up to The Guardian about his decision to leave the wildly popular TV program after 16 years.

In the article published over the weekend, Stewart said, among other reasons, he was more or less worn out from doing the show for so long. "It's not like I thought the show wasn't working any more, or that I didn’t know how to do it," Stewart said. "It was more, 'Yup, it's working. But I'm not getting the same satisfaction.'"

And, according to Stewart, the 2016 election isn't shaping up to be anything out of the ordinary, even though Democratic front-runner Hillary Clinton has the chance to become the first woman U.S. president.

Stewart announced his decision to leave "The Daily Show" in early February this year but has yet to announce a date for his final taping.

However, if it's anything like his good friend Stephen Colbert's finale after nine seasons of hosting "The Colbert Report," it will certainly be star-studded, surprising and, most importantly, satirical.