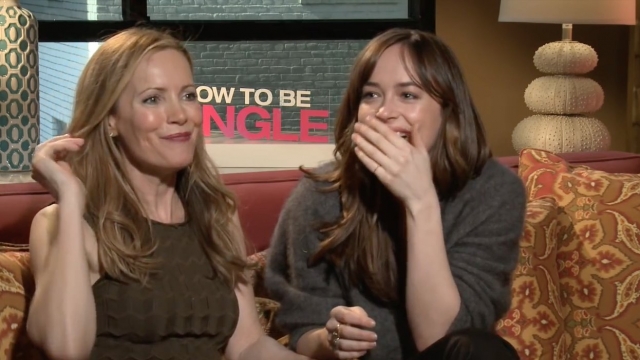 SMS
Leslie Mann And Dakota Johnson Flirt Their Way Out Of An Interview
By Ryan Biek
By Ryan Biek
February 1, 2016
The actresses sat down for an interview to promote "How To Be Single," but after their antics, the reporter had only a minute left to ask questions.
SHOW TRANSCRIPT

Leslie Mann and Dakota Johnson must be getting tired of doing interviews for their upcoming film "How To Be Single," because they just found the perfect way to make the questions stop: hit on the reporter.

"Are you single? You're handsome," Mann told the reporter.

Off to a good start. Then after a minute of flirting with WSVN reporter Chris Van Vliet and trying to set him up with their friends, the actresses turned to, well, this:

"Can you take off your shirt?" Mann said.

"Which one?" Van Vliet asked.

"All of them," Johnson said.

Van Vliet eventually realized he had less than a minute left to ask the pair any questions — and the video gets even better from there.

He probably should have been more prepared for this, though, given all the celebrity advances he's had to endure.

"I would loosen your tie a little bit. Yeah, there you go," Shailene Woodley once told him.

Be sure to check out the rest of the hilarious interview on Van Vliet's YouTube page. "How To Be Single" hits theaters Feb. 12.