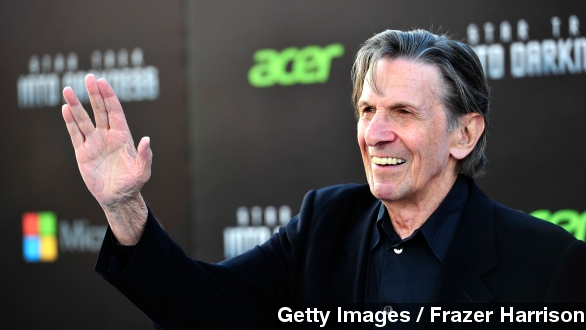 Actor Leonard Nimoy died at his home in Los Angeles on Friday. He was 83 years old.

The actor was best known for playing the forever-logical half-human, half-Vulcan Spock in the original "Star Trek" series and movies and was beloved by Trekkies worldwide. (Video via Paramount Pictures / "Star Trek: The Motion Picture")

Nimoy was nominated for three Emmys for his work with the "Star Trek" franchise. He not only acted but also did some directing and writing for the movies.

Nimoy even had a cameo in the recent J.J. Abrams remakes of the films: playing an older Spock alongside Zachary Quinto.

But that wasn't the only thing he did, as he pointed out in the title of his 1975 autobiography "I Am Not Spock." Nimoy also published books of poetry, starred in other TV series, did some on-stage acting and even recorded some albums. His second autobiography in 1995, though, was named "I Am Spock." (Video via Los Angeles Times)

Fans across the world — and in space — took to social media to express their sadness over his death. Many messages reflected the sentiment of astronaut Chris Hadfield, who tweeted: "Leonard, you lived long and prospered, and were an inspiration to me and to millions. Rest in peace."

And thousands of fans retweeted Nimoy's last tweet, which read, "A life is like a garden. Perfect moments can be had, but not preserved, except in memory. LLAP."

The actor is survived by his wife, Susan Bay Nimoy; his children; and his grandchildren. Susan confirmed his death Friday and said the cause was end-stage chronic obstructive pulmonary disease. Nimoy attributed the disease to smoking when he announced he had it last year.