Leo DiCaprio And Kate Winslet's Friendship Is The Real #Goal 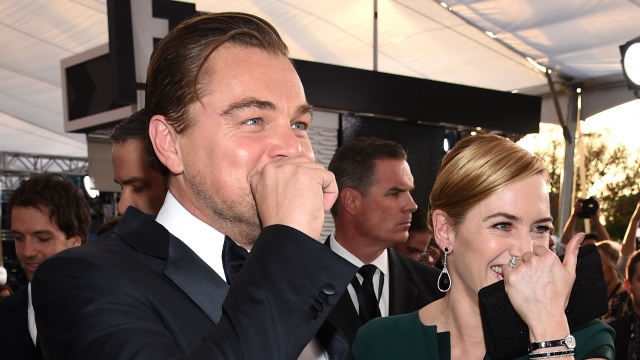 Leonardo DiCaprio and Kate Winslet — the ultimate #friendshipgoals, as defined by this awards season.

We all know it's Leo's time to shine, and he's favored to finally win the best actor Oscar for "The Revenant." And we all have his back, including Winslet, his former "Titanic" co-star.

The press have dubbed her his "main groupie," to which he replied, "Kate? That's my homegirl."

Clearly, they are homies. They've been gushing about each other for almost 20 years.

He even reportedly walked her down the aisle when she married Ned Rocknroll in 2012.

Between the long-lasting mutual love for each other, and talk of a "Titanic" homecoming every time they're seen together, their reunion at the Golden Globes sent the Internet into a meltdown.

And when Leo won his first Screen Actors Guild award for lead actor, they made a beeline for each other for a quick hug before he headed on stage.

Kate's support of Leo is so strong that it's why she said she's attending the Oscars in a year where many are boycotting the ceremony over a lack of minority nominations.

She said at the London premiere of "Triple 9": "I feel very strongly that it may possibly be Leo's year. He is my closest friend in the world, and I just couldn't imagine not being there to support him."

And her support is saying a lot, especially since her "Steve Jobs" co-star Michael Fassbender is competing against Leo in the acting category.

So when Leo gives that Oscar acceptance speech, we hope he gives her a heartfelt shout out, just like she did when she won the Golden Globe for "Revolutionary Road" — the 2008 film that reunited them on-screen.

Never let go, Kate. Never let go — even though you admitted that door you were floating on was big enough for both of you.