Leno On Cosby: Why Is It 'So Hard To Believe' Accusers? 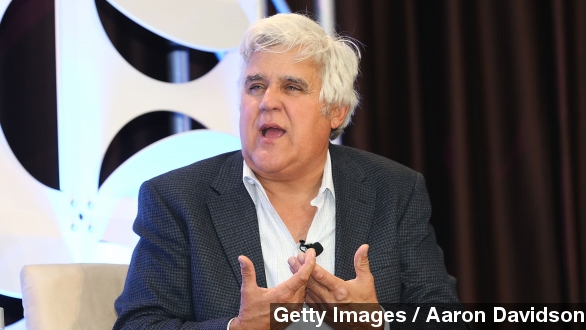 SMS
Leno On Cosby: Why Is It 'So Hard To Believe' Accusers?
By Lauren Zima
By Lauren Zima
January 21, 2015
Jay Leno spoke out for the first time Wednesday on the sexual assault accusations against Bill Cosby.
SHOW TRANSCRIPT

Jay Leno has spoken out about fellow comedian Bill Cosby.

Variety reports at the National Association of Television Program Executives conference, Leno told the crowd: "I don't know why it's so hard to believe women. You [go to] Saudi Arabia and you need two women to testify against a man. Here you need 25."

Leno gave additional thoughts on how the Cosby story broke, which you can read in Variety's piece, but bottom line: He's clearly not supporting Cosby. (Video via NBC / "The Tonight Show")

And Cosby is someone Leno had a history with. Mediaite says Cosby was a guest on Leno's "Tonight Show" nearly 20 times over the years.

"Why aren't people listening to these women? ... Is it just because they're women? I would say enough have come forward."

By now, multiple comedians have commented on the allegations — director Judd Apatow has called for the cancellations of Cosby's shows. Others like Cedric the Entertainer and Jerry Seinfeld have been less adamant but used words like "unfortunate" and "incomprehensible" about the situation.

No criminal charges have been filed against Cosby based on these recent claims, though for many, they would be past the statute of limitations.