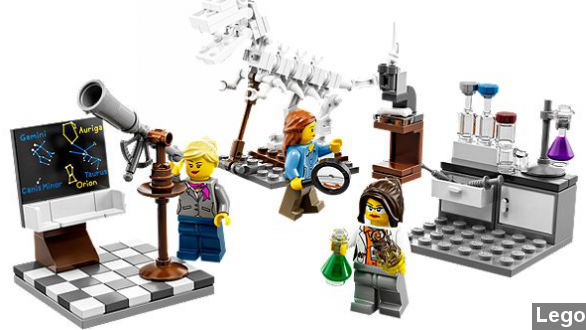 Legos allow you to build pretty much anything, and now the Danish company that inventd the toy is trying to build something else — support for females in technology fields. (Via Getty Images)

Introducing: the Lego Research Institute set. It includes three women with scientific professions including a paleontologist, astronomer and chemist.

The product was released through Lego's Lego Ideas program, which allows designers outside the company to design custom sets that then have a chance of becoming actual products after recieving 10,000 votes.

​The release comes months after a 7-year-old girl wrote Lego a letter complaining that all the girl Legos did was just ​"sit at home, go to the beach and shop" and had no jobs, while the boys "went on adventures, worked, saved people, and had jobs, even swam with sharks." (Via The Society Pages)

While it may seem like a pretty routine product announcement, there's a lot of scrutiny these days when it comes to how toys portray gender, particularly when it comes to showing women in STEM jobs — that's science, technology, engineering or math.

Mic says the decision is exactly what young women need, writing: "Rather than just releasing Lego sets featuring women in traditionally 'unfeminine' roles (whatever that means), the set features strong, driven, smart women in an array of STEM jobs."

And a ThinkProgress writer says that the new toy will "help combat some of the subtle ways that society signals to girls that they shouldn't get interested in the STEM fields."

But despite the Lego Research Institute set, the company has sometimes been a target of those who see toys as the first step to ending harmful gender stereotypes.

Earlier this year, a guest writer at Scientific American found that for every female Lego minifigure, there are four male ones. Hardly any of the female characters represented STEM professions.

And an article by a female physicist on The Guardian criticized Lego for including female stereotypes in a recent set, which included a grandma, a diner waitress and a pretzel girl.

"Lego is modular. It is perfectly designed for avoiding this issue, because you can just make all the bits ... and let children put them together for themselves. Why impose the stereotypes on them at all?"

The company also got quite a backlash when it released "for girls" sets called "Lego Friends" — which traded in the traditional minifig for dollhouse-style characters. (Via Disney / 'LEGO Friends')

So it looks like Lego still has some work to do to silence its critics, but the fact that the Research Institute set has already sold out might show they're on the right track.