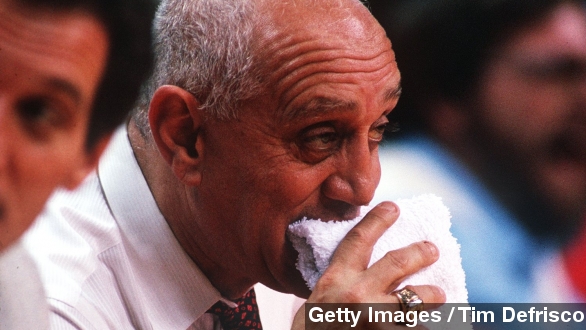 Legendary, colorful and controversial basketball coach Jerry Tarkanian, one of the most successful coaches in college basketball history, has died at the age of 84.

Tarkanian's son, Danny Tarkanian, tweeted the news Wednesday, writing: "Coach Tark, my father, the greatest man I have ever known, passed today, to take his place in heaven. I will miss him every day of my life."

Tarkanian's rise to college basketball glory came during his time with the Runnin' Rebels at the University of Nevada, Las Vegas. He coached UNLV to the school's only four Final Four appearances, an undefeated season and one national championship in the 1989-1990 season.

As much as Tarkanian is known for his coaching on the court, he also developed a reputation off it by constantly going to war with the NCAA over its rules. He carried on a lawsuit with the association for almost six years, which resulted in the NCAA settling out of court with Tarkanian in 1998.

Despite the back and forth with the league, he was finally inducted into the Naismith Memorial Basketball Hall of Fame in 2013. He was also honored by the basketball program he made famous in 2013 with a statue outside of the stadium.