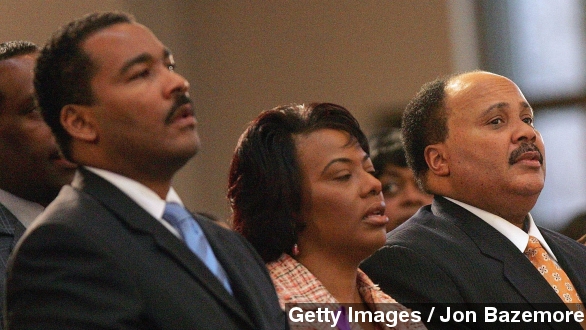 SMS
Legal Battle Over MLK's Bible, Nobel Prize Could End Tuesday
By Ben Lawson
By Ben Lawson
January 11, 2015
A judge is expected to rule Tuesday on the legal dispute between Martin Luther King, Jr.'s children over ownership of his Bible and Nobel Prize.
SHOW TRANSCRIPT

A long, ugly legal dispute between three of Martin Luther King, Jr.'s children could end as early as Tuesday.

The three heirs to the King estate, Bernice, Dexter and Martin, have been in a legal battle over their father's bible and 1964 Nobel Peace prize. The brothers reportedly want to sell the medal and bible but Bernice refused to hand them over. (Video via The Norwegian Nobel Committee)

The Bible is the same one President Obama used during the swearing-in for his second presidential term. (Video via The White House)

The brothers reportedly want to sell the two items to raise money for the estate, but Bernice is fighting the sale. She was ordered to hand both items over to the authorities early last year. (Video via CNN)

The Bible and Nobel have now spent 10 months in a safety deposit box controlled by the court, but that could change Tuesday when the judge could either decide the case outright or allow it to go to trial.

The legal dispute isn't about the sale but rather about ownership. Bernice claims the Nobel Prize rightly belongs to Coretta Scott King's estate, which Bernice controls.

The brothers haven't spoken to the media about the case, but Bernice has.

At a press conference last March, she told her brothers, "These two artifacts are too sacred to be sold or be bought under any circumstance. ... I implore you to consider the magnitude of this moment in history and how you want your individual legacies to be defined."

It's not known who the brothers intend to sell the items to, if they even have a buyer in mind.

This is reportedly at least the fifth lawsuit between the siblings in the last decade.