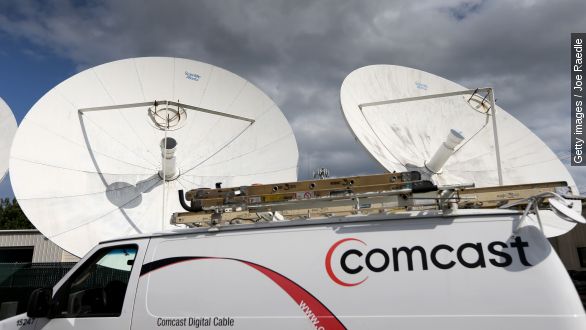 When Comcast and Time Warner Cable announced their intent to merge last year, consumer advocates cried foul, claiming the two companies, when combined, would create a cable giant so big it would harm consumers.

And according to Bloomberg, the government is close to agreeing. The outlet says attorneys at the Justice Department are preparing to file an antitrust suit to block the merger.

It's relatively rare for the U.S. government to block a merger. Comcast executives said in February that they were "optimistic" and "comfortable" that the merger would go through.

Still, the $45.2 billion "mega-deal" has been controversial from the start: It would make Comcast an even more powerful player in the Internet and television market, with over 70 million customers.

And the U.S. Justice Department might not want Comcast to get more powerful. The company has developed a reputation for substandard customer service and in 2014 was named the worst company in America by Consumerist.

It wasn’t that long ago that many saw the deal as a sure thing. Comcast and Time Warner Cable’s coverage areas don’t overlap so it wouldn’t mean less options for consumers.

But a media and tech analyst told USA Today the deal would give Comcast control over high-speed Internet access in 19 of the 20 largest U.S. cities.

Which is why some worry that Comcast would be able use its weight to stifle the Internet video streaming business.

Comcast has already had a very public war of words with Netflix. That battle ended with the video streamer agreeing to pay Comcast for faster and more reliable Internet access for Comcast subscribers using Netflix.

Then there is the cable side. Many TV execs are worried that the deal would allow Comcast to undercut how much programmers are paid for their channels while charging consumers more.

There is also the issue of the FCC’s recently-passed net neutrality rules. This merger could violate the open Internet those regulations are meant to protect by giving Comcast too much control over who can access the Internet.

So what happens next? Well, it's unlikely Comcast or the U.S. government are going to back down — meaning we could be in for a long legal battle.

This video includes images from Getty Images and Will C. Fry / CC BY NC ND 2.0.