LeBron James Opts Out, But Likely Won't Be Leaving Cleveland 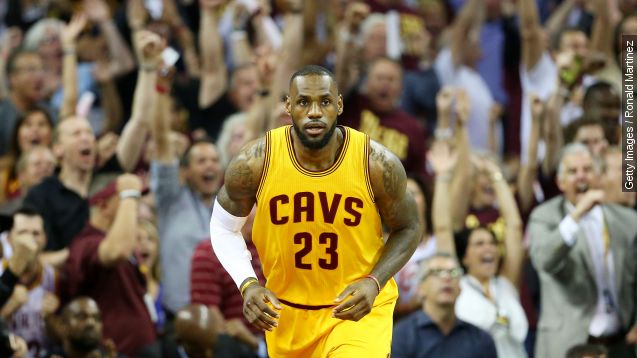 SMS
LeBron James Opts Out, But Likely Won't Be Leaving Cleveland
By Matt Moreno
By Matt Moreno
June 29, 2015
LeBron James is expected back with the Cavaliers next season as his move to become a free agent seems to be strictly about business.
SHOW TRANSCRIPT

"The lasting memory of tonight will be this shot — his burning jersey in Lakewood," WEWS reported in 2010.

Last year, James signed a two-year deal to come home to Cleveland. In his announcement to Sports Illustrated, he mentioned his desire to return home and bring a title to Northeast Ohio.

Sunday night, he opted out of that deal, a move almost completely expected. (Video via Nike)

The current opt out is all about business with the most likely scenario being James signing back with the Cavs, opting out again, then signing with the Cavs again.

As Cleveland.com explains, James would be in line for a sizable pay increase if he does, "He wants contract flexibility next summer when he's expected to maximize his earning potential by signing a long-term deal when revenues begin pouring in from the NBA's new $24 billion TV contract."

"He figures to become not only the third NBA player ever to get paid $30 million in a season, Michael Jordan and Kobe Bryant being the others ... He may become the first $40 million player," ESPN's Mike Greenberg.

James' opt-out also puts pressure on Cleveland management to surround him with talent.

James, more or less, willed his team to the NBA Finals this year after his supporting cast of Kevin Love and Kyrie Irving both went down with injuries.

Now, a large portion of last year's squad is up for grabs including Love, J.R. Smith, Iman Shumpert and Tristan Thompson.

A writer for USA Today says, "If the team completely bombs the offseason and everyone leaves, James could then decide to play elsewhere — but there’s no reason to suspect that will happen."

In the off-chance James does leave, CBS Sports' Craig Carton says the New York Knicks would make for a sensible destination.

"You just took Cleveland to an NBA Final, you look around and you're playing with a bad group of guys. Kevin Love is gone, Kyrie Irving's knee might be a long-term problem now. What do you got? You come to the Knicks, you've got yourself some stuff," Carton said.

James officials becomes a free agent July 1, but won't be able to sign another contract until July 9. According to Cleveland.com, there's "no timetable" for when he may sign.