LeBron James' NBA Finals Performance Might Only Win Him MVP 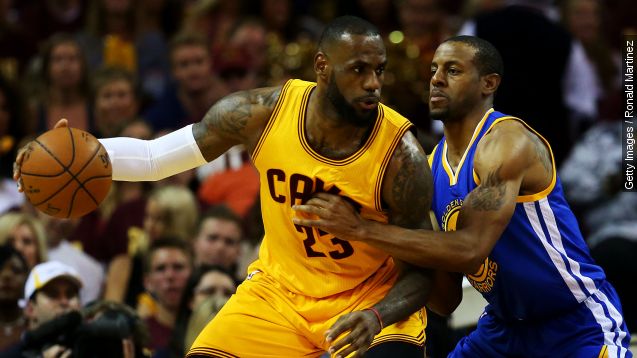 Win or lose, what LeBron James has done to get the Cleveland Cavaliers this far is impressive.

James and the Cavs are on the brink of elimination from the NBA Finals going into Tuesday night, down 3-2 in the series. But there's a legitimate chance that King James could still be anointed MVP despite losing the Finals. (Video via Cleveland.com)

"If by chance the Cavs lose, and we don't want to talk about that, but if they do lose, keep watching tonight to see if LeBron James will be named MVP of this series. He does deserve it," said anchor John Anderson for Cleveland's WKYC.

That's happened just once in the NBA, in 1969 when Jerry West became the first player in the league to be named the Finals MVP despite being on the losing side of the ball. (Video via The Dan Patrick Show)

James's 40-point triple-double in game five Sunday was the first in the Finals since West's in game seven that year.

The self-described "best player in the world" is keeping his team in it despite losing All-Star forward Kevin Love in the conference semifinals and point guard Kyrie Irving after the first Finals game due to injury.

For a team that finished 14 games under .500 last year and hasn't seen the NBA Finals since James' first tenure in Cleveland in 2007, he's clearly had an impact.

Which is why so many are lobbying for him to be crowned the MVP. There's only one problem:

"It will be Steph Curry. Even though the most outstanding player is LeBron James. ... It's going to be Steph Curry because he's the guy of 'what have you done for me lately?'" a Fox Sports commentator said.

While he may not be at James' level this Finals, Warriors guard Steph Curry has been leading the charge for Golden State. If the Warriors win in six, it's tough to make a case that Curry should lose.

If Golden State can pull off the victory, it will be the Warriors' fourth NBA Championship overall and the franchise's first since 1975.