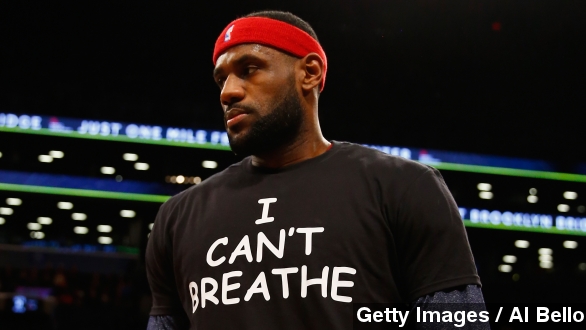 "I can't breathe." The last words of Eric Garner, who died in July after after being put in a chokehold by an NYPD officer.

The phrase has become a rallying cry for protesters and a way for others to show support — including Cleveland Cavaliers superstar LeBron James. He was one of several players to wear this shirt during warmups Monday night.

James is one of the most famous and influential athletes in the world, possibly ever. When the best basketball player on the planet does something, people take notice.

And that's a burden and responsibility he apparently understands. In 2012, James organized his Miami Heat teammates for this dramatic post on the Trayvon Martin shooting — the first athletes to speak out.

He's weighed in on several other social issues, including Mike Brown's death in Ferguson, Missouri.

James might be a surprising candidate to be so outspoken. Announcing his move to the Miami Heat on live TV was incredibly tone-deaf, and as the face of so many major brands, you'd think he would have the most to lose.

But his Heat and Cavs teammate James Jones told USA Today the four-time MVP has matured and become more comfortable in his own skin.

"He uses his platform not as a way to tear things down but to bring attention and conversation. … He's being genuine, he's being himself and that's all you want from anyone."

Activism in sports is obviously nothing new.

Muhammad Ali was arrested and banned from boxing for his comments on the Vietnam War.

And this photo of the "Black Power Salute" at the 1968 Mexico City Olympics is one of the most famous sports images of all time.

But at some point the risk of speaking out and offending sponsors became too great of a risk for most athletes.

While today's athletes are apparently more willing to take a stand on social issues, a Cleveland.com columnist says there's something special about James that separates him from other outspoken modern-day athletes.

"Not his willingness to address topics that could hurt his brand and alienate his fan base, but his desire to educate himself on social crises, something that's much bigger than basketball."