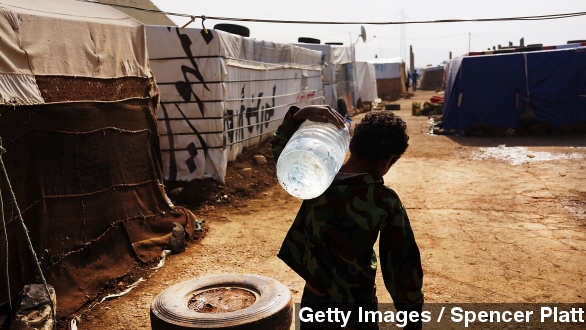 SMS
Lebanon Requiring Visas For Fleeing Syrians Is Tough Call
By Cliff Judy
By Cliff Judy
January 5, 2015
Lebanon has the most concentrated population of Syrian refugees, an incredibly difficult and expensive problem in the humanitarian crisis.
SHOW TRANSCRIPT

After nearly four years of civil war and with at least 3 million people seeking shelter in neighboring countries, calling the Syrian refugee situation a crisis now sounds like an incredible understatement.

But as the need only promises to increase, Lebanon made it more difficult Monday for Syrians to flee to safety in what appears to be a question of money and space.

Syrians must now have a visa to enter Lebanon. That's a tall order for many who've left everything behind to escape the brutal violence. The Wall Street Journal reports a tourist visa requires proof of a hotel reservation, ID and $1,000. (Video via Euronews)

The United Nations High Commissioner for Refugees lists Lebanon and Turkey with virtually the same number of refugees from Syria, each with than 1.1 million people documented, but some estimate another half million undocumented refugees may be in Lebanon.

In Turkey and other host countries, those refugees have camps. Camps often lacking a full stock of supplies for such an overwhelming need, but camps nonetheless. Not so in Lebanon. (Video via United Nations High Commissioner for Refugees)

The country has host communities where refugees mostly live in squalor. Lebanon's crowded population already consisted of 4.5 million people, so add 1.5 million desperate refugees and the situation is understandably tense politically, economically and among the various religious sects.

Lebanon's former head of the Syria crisis response told The Wall Street Journal about the competition for jobs, "It is a race to the bottom between the poorest Syrians and the poorest Lebanese."

Two weeks ago, Lebanon's social affairs minister announced the Syrian crisis has cost the country $20 billion since 2011, only a fraction of which has been supported by international aid.

Perhaps more concerning for the Lebanese, the BBC's Paul Wood, who's based in Beirut, said resentment of the refugees is growing. "Above all, many Lebanese fear the country's religious and sectarian balance is being altered in a way that will eventually trigger a renewed civil war here."