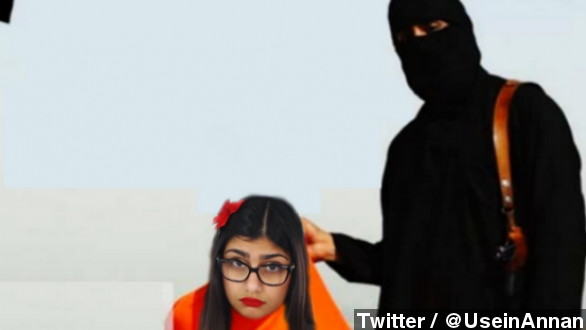 A Florida woman's choice of profession has stirred up controversy in her home country of Lebanon.

It sparked outrage on Twitter and even death threats, such as this photoshopped image of Khalifa being held by terrorists, mimicking the recent killings of journalists by ISIS. Although the image was posted on this Twitter account, it's unclear who created it.

Some were particularly offended by a pornographic video featuring Khalifa wearing a hijab, a traditional headscarf worn by many Muslim women.

But Khalifa defended her actions to The Washington Post, saying the scene was meant to be "satirical." She explained, "There are Hollywood movies that depict Muslims in a much worse manner than any scene Bang Bros [the company that made the video] could produce."

CNN reports her family provided a statement to Arab news outlets saying: "We disassociate ourselves from her actions which do not reflect her family beliefs, her upbringing or her true Lebanese roots. We hope that she comes back to her senses as her image does not honor her family or her homeland."

Khalifa is not without supporters online, though. One Beirut blogger wrote, "I don’t really care what any of you think about her career choice, after all, it's her body to do whatever she wants with."

And this week American musical duo Timeflies came out with a song defending Khalifa.

Lebanon has a reputation as one of the more liberal countries in the Middle East, but it recently came under fire for blocking a number of adult websites in the country.

This video includes images from Getty Images and EuseBius@Commons / CC BY 2.0.