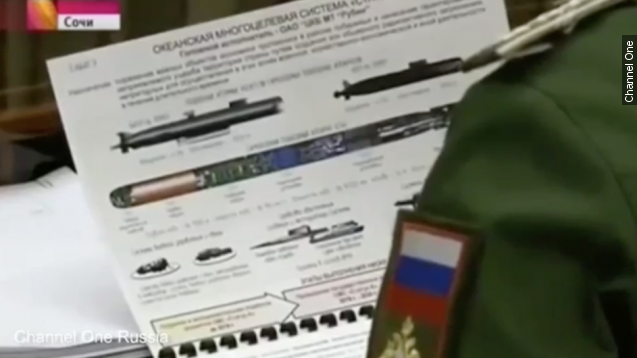 SMS
Leak Or Ploy? Russian Missile Plans Show Up On State TV
By Katie Link
By Katie Link
November 12, 2015
People are speculating as to whether "secret" information about Russia's new nuclear weapons leaked through the media was really secret at all.
SHOW TRANSCRIPT

A top-secret Russian nuclear plan has been "leaked" to the public during a state-run broadcast. Emphasis on the air quotes.

State-run TV stations NTV and Channel One aired footage of Russian President Vladimir Putin meeting with military officials in Sochi. One of the shots clearly displayed documents containing classified information and pictures of weapons. (Video via Channel One)

For those of us who can't read Russian, the document details a new long-range nuclear torpedo Russia is supposedly developing. (Video via Russian Ministry of Defense)

According to this document, the weapons could create "zones of extensive radioactive contamination making them unsuitable for military or economic activity for a long period."

Scary, right? Well, some people speculate the footage, which has since been deleted from the stations' websites, was actually aired on purpose with the intent to scare Western countries.

Putin, a former Soviet intelligence officer, has been known to use disinformation tactics in the past. The BBC reports during the offending broadcast, Putin railed to his generals about a planned U.S.-NATO anti-missile defense system. (Video via AiirSource)

A Russian analyst told The Moscow Times the leak was likely intentional. He said, "This is a gentle hint at the kind of asymmetric response Russia is prepared to execute should aggravation prevail over a reasonable tradeoff in its standoff with the West in general, and the U.S. in particular."

We should also note, a state-run newspaper published details of the torpedo weapon after the footage aired on TV, so it's probably extra-unlikely the Russian government's all that concerned about this information getting out.