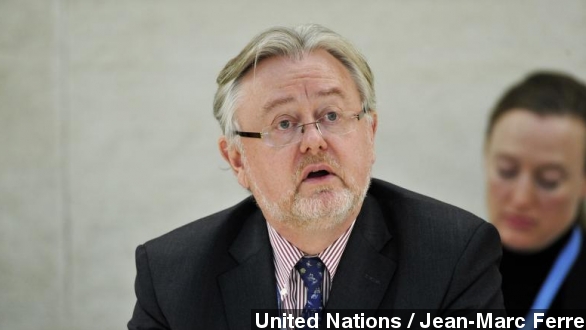 SMS
Lead U.N. Gaza Conflict Investigator Resigns On Bias Claims
By Jake Godin
By Jake Godin
February 3, 2015
The chairman for the United Nations Commission of Inquiry on the 2014 Gaza conflict has resigned after Israel officials said he was biased.
SHOW TRANSCRIPT

The head of a United Nations inquiry into last summer's Gaza war has quit. (Video via Case Western Reserve University School of Law)

Canadian human rights expert William Schabas has resigned as chairperson of the U.N.'s Commission of Inquiry on the 2014 Gaza conflict. This is after Israeli officials accused him of bias.

Schabas was appointed to the three-person commission in August of last year to investigate whether any war crimes were committed during the 50-day long Israel-Gaza conflict.

The Israel Defense Forces has accused Hamas of both inflating the number of Palestinian civilian casualties and causing civilian deaths themselves by using them as cover.

An Israeli official asked the United Nations to dismiss Schabas on Jan. 30 citing a "incontrovertibly blatant conflict of interest." He referenced consultancy work Schabas did for the Palestinian Liberation Organization in 2012.

Schabas acknowledged the work in his resignation letter Tuesday but dismissed any conflict of interest. Still, he says he resigned so Israel's claims of bias wouldn't overshadow the commission's work.

Israel's current government isn't exactly a fan of Schabas, and that feeling appears mutual, based on comments like this one in 2010:

"Frankly, if I had to think of an individual that would be the greatest threat to the survival of Israel, it'd probably be Netanyahu."

Prime Minister Netanyahu welcomed the Schabas news and went a step further, calling the U.N. Human Rights Council an anti-Israel body and saying the Gaza report should be shelved. (Video via the Office of Prime Minister Benjamin Netanyahu)

The commission says its currently in discussions with the remaining two members, Doudou Diène of Senegal and Amal Alamuddin of the United Kingdom, to figure out who will replace Schabas. The full report is scheduled for release on March 23.

This video include images from the United Nations / Jean-Marc Ferré.