Lawsuit Blames Snapchat After Teen Wrecks While Taking A Selfie 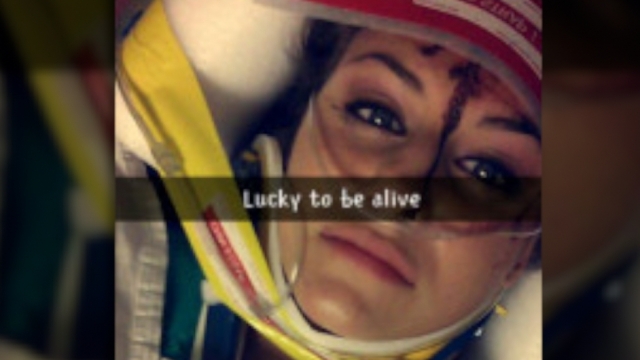 By Ben Lawson
April 28, 2016
The teen was using a Snapchat filter that reportedly clocked her top speed at 113 miles per hour before she crashed into another car.
SHOW TRANSCRIPT

A lawsuit claims Snapchat is putting the public at risk with a filter that records users' speeds at the time they take a photo.

The suit accuses Christal McGee, who is now 18 years old, of using the filter when she struck another car at more than 100 miles per hour, leaving the other driver with permanent brain damage.

McGee took a picture of herself on Snapchat that appears to show her bleeding on a stretcher immediately after the crash.

And now, Snapchat is being accused of negligence in the wreck in a lawsuit filed by Wentworth Maynard.

Maynard, the driver injured in the crash, was left with permanent brain damage that causes him to have memory loss, depression and difficulty communicating.

Passengers in McGee's car allegedly told lawyers that the filter showed 113 miles per hour before her vehicle struck Maynard's.

Reconstruction of the accident puts McGee's speed at 107 miles per hour, according to the suit.

Maynard's lawyers claim Snapchat encourages people to use the filter while driving and the company, along with McGee, should be held responsible for Maynard's medical bills and lifelong care.

Snapchat and McGee have not yet commented on the suit.

This video includes a clip from Snapchat and images from The Law Offices of Michael Lawson Neff, P.C. and Getty Images.