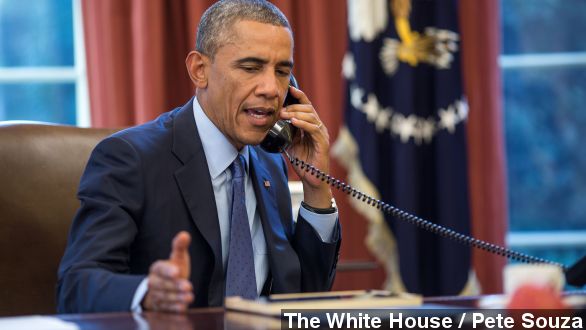 REP. MIKE ROGERS VIA MSNBC: “I can tell you that it is causing real problems with our Sunni Arab League partners in the fight against ISIS."

The Wall Street Journal reports last month Obama wrote to Ayatollah Ali Khamenei emphasizing the two countries' common interest in defeating ISIS. According to the Journal: “The letter appeared aimed both at buttressing the campaign against Islamic State and nudging Iran’s religious leader closer to a nuclear deal.”

Iran has been left out of the U.S.-led campaign against the militant group. (Video via YouTube / ولاية الرقة)

Any effort to involve it, Sen. John McCain and Lindsey Graham called “outrageous,” given Iran’s support for the Assad regime in Syria, as well as other Shiite groups, including Lebanon’s Hezbollah.

The White House has long said it would not swap concessions in the nuclear talks for Iran’s cooperation in Iraq and Syria. The letter, if true, would certainly suggest otherwise.

But the administration won’t confirm or deny it.

WHITE HOUSE PRESS SECRETARY JOSH EARNEST VIA BBC:  "not in a position to talk about private correspondence between the president and another world leader."

But is stressing U.S. policy on Iran hasn’t changed.

This is believed to be the fourth time President Obama has written to the Supreme Leader.

Major Garrett at CBS writes: “Those familiar with the Obama-Khamenei correspondence say public denials reinforce the perception within Khamenei's inner circle that he has a secret back-channel to Obama.”

It’s a perception that likely won’t sit well with allies in the region — many of whom were outraged back in 2012 after the U.S. launched secret negotiations with Iran but didn’t inform them until the following year.

As for these latest negotiations, the U.S, Iran and other world powers are facing a Nov. 24 deadline to work out a final nuclear agreement.

They reached an interim deal a year ago, giving Iran some sanctions relief in exchange for curbing its nuclear program. (Video via Voice of America)

President Obama faces opposition members of both parties — in particular Republicans — who say Iran got the better end of the deal last November and are wary of any deal that provides more sanctions relief.

HOUSE SPEAKER JOHN BOEHNER VIA HLN: "I don't trust the Iranians. I don't think we need to bring them into this, and I would hope that the negotiations that are under way are serious negotiations, but I have my doubts.”

On Sunday, Secretary of State John Kerry will meet with Iran’s Foreign Minister. Kerry recently told reporters in Beijing there was no link between negotiations on Iran's nuclear program and other issues in the region.

This video includes images from Getty Images and The White House / Pete Souza.