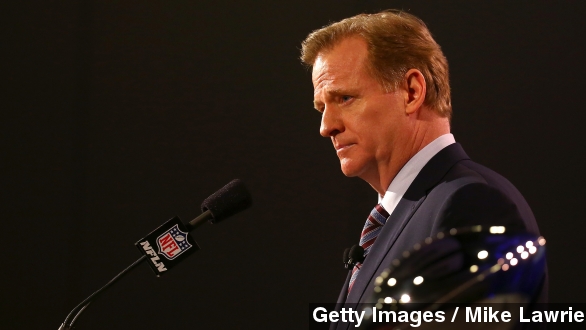 SMS
Lawmakers Challenge NFL's Nonprofit Status
By Tyler Adkisson
By Tyler Adkisson
February 1, 2015
This football season, lawmakers across the country have challenged the NFL's tax-exempt status, and the Super Bowl has resuscitated the issue.
SHOW TRANSCRIPT

The Super Bowl marks the end of the NFL's official season, which for some, has been more memorable for the league's handling of trademark and domestic violence issues rather than the on-the-field action.

And some critics are looking beyond Deflate-gate to, once again, challenge the NFL's nonprofit status that makes it a tax-exempt trade association and means even higher profits for a very profitable league.

Which begs the question: What are the chances this policy is ever going to change for the NFL?

This newfound attention comes as the NFL's league office — the tax exempt component that oversees the league's rules and inner workings — prepares to announce the fiscal report for 2014.

Economists question if the league can follow up its massive revenue numbers reported for 2013 — to the tune of $327 million.

According to the National Retail Federation's Super Bowl Spending Survey, the chances are good, as average viewer spending is expected to reach a survey-high $77.88.

But most of this new attention comes with political overtones. This week, several new bills were filed at the federal and state levels, aiming to change the business status of professional sports organizations, like those that are currently tax-exempt.

Rep. Jason Chaffetz is pushing a bill to strip tax exemption from all professional sports. He tells Buzzfeed: "To say establishments like the NFL are not for profit organizations is laughable. They are a for-profit and should be taxed as such."

However, these bills are seemingly ambitious, considering that similar legislation filed in September 2014 by Sens. Cory Booker and Maria Cantwell failed to garner enough support.

Also worth noting: The NFL does not cover a majority of public expenses incurred by a Super Bowl host city. This year, the big game could cost Glendale, Arizona over $3 million.