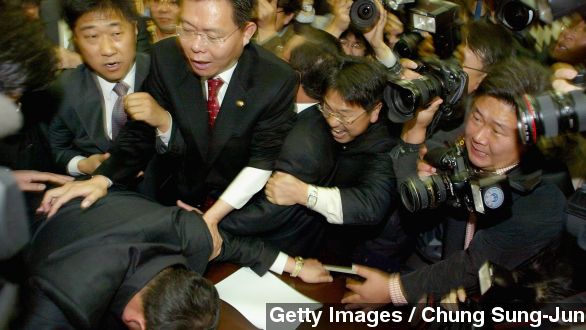 Sure, our lawmakers can be petty and unproductive, but they’ve got nothing on these guys. (Video via The White House)

After that show, Congress looks downright civilized. Turkey’s most recent parliamentary fistfight — the second of two this week alone— got us thinking, how do these shouting matches devolve into all-out brawls?

Legislative violence has a long tradition that arguably started with the assassination of Julius Caesar on the Senate floor. Today the fights are less gory, more YouTube-friendly.

We’re looking at you, Rob Ford. (Video via CBC)

But the basic motivations remains the same. A researcher at the Hertie School of Governance says there's a “credible commitment problem" nearly every time.

In other words, there's a situation when neither side can trust the other to stick to its end of a bargain. These credible commitment problems tend to show up more in new democracies where political norms aren't yet fully developed. (Video via BBC)

But no matter how old the democracy, at the end of the day, there's no counting on these lawmakers to stay on their best behavior. So, here are some tips should you find yourself in the middle of a parliamentary fistfight.

Or Judo match, for that matter. (Video via YouTube / Oneshot112)

Try shielding yourself with a seat cushion or umbrella, and if all else fails, take a page from the Brits' playbook. (Video via Live 9 TV, Radio Free Europe / Radio Liberty)

The House of Commons is designed to keep those seated at the government and opposition benches always “two sword lengths apart.”

This video includes images from Vincenzo Camuccini and Thomas Rowlandson.