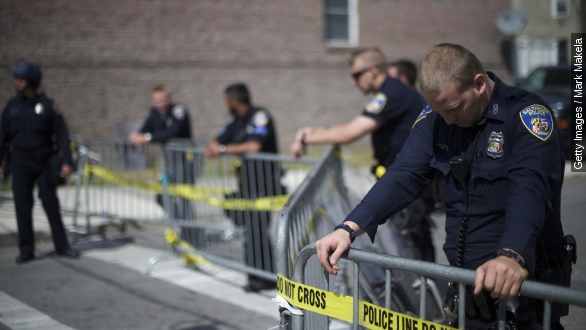 In 2014, 51 law enforcement officers were killed in criminal incidents in the line of duty. That's up 89 percent from 2013, though we should note that year represented a historic low.

Those preliminary stats come from the FBI, which is releasing full details in the fall. (Video via Arizona Daily Star)

Of those 51 law enforcement deaths, 11 came after disturbance calls, 10 after traffic stops or pursuits and eight from ambushes.

The numbers come after Hattiesburg, Mississippi, lost its first officers in the line of duty in decades. Officers Benjamin Deen and Liquori Tate were killed after making a traffic stop Saturday.

The FBI's figures don't include Deen and Tate, as their deaths took place this year. Still, police deaths in the line of duty — especially amid tensions across the country — highlight the difficulties of the job.

"All of the black men in this country who have been treated unfairly by our police," Maryland State Sen. Catherine Pugh said at a rally in Baltimore.

Protests after Freddie Gray's death while he was in police custody have also spotlighted the reverse — calling into question police treatment of suspects, black men in particular. (Video via WMAR)

The FBI's newly released stats don't touch on suspect deaths in police custody. That data, in fact, is degrees harder to come by. The Bureau of Justice Statistics has suggested as many as 64 percent of "arrest-related deaths" aren't properly reported.