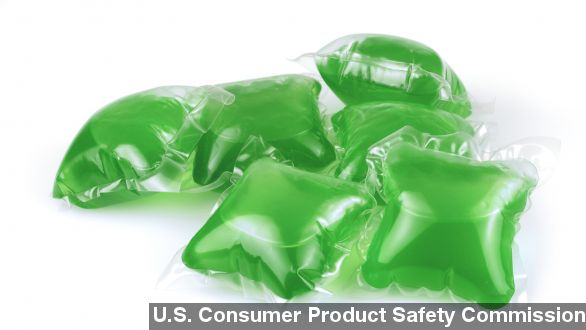 They might make for a quick and easy way to do laundry, but a new study says 'laundry pods' can also pose a health risk to kids.

VIA ABC: "Laundry detergent pods — accidental poisonings sent more than 700 children to the hospital during the first two years they were on the market. One baby died."

VIA CBS: "The squishy packets can be mistaken for candy or food, and experts say they should be stored away from children."

The study was conducted by the American Association of Poison Control Centers, or AAPCC, and published in Pediatrics. It reports that the pods can be more dangerous than normal detergent.

It says reports of kids swallowing traditional detergent usually resulted in mild stomach upset or no symptoms at all. However, the pods also caused vomiting, wheezing, gasping, sleepiness, breathing problems, and corneal abrasions.

Now, we should mention the study focused on laundry pods and made no mention of dishwashing detergent pods. Still, the dangers of these detergent pods have been known about for a while. KTVB spoke with one pediatrician in 2012 about what makes them so harmful.

DR. MARK URBAN VIA KTVB: "The main packet is usually polyvinyl alcohol which is rapidly dissolvable ... the issue with that is the polyvinyl alcohol is water soluble and, if you eat it, it can be absorbed by the body."

The Centers for Disease Control and Prevention posted a warning in 2012, when the pods first started coming out, about 'health hazards' associated with them, citing multiple case reports of children falling ill.

VIA KNXV: "Proctor and Gamble started repackaging the pods in a double latch lid, but the company never recalled the old, pull-apart packages."

"She was able to even pull this open very easily. All they need is their two little teeth up front, bite down on this, and boom."

While the packages do have warnings about keeping them out of the reach of children, experts say not all parents read the labeling and mistakes can happen.

If your child is exposed to the laundry pods, AAPCC says you should call your local poison control center.

This video includes images from Mike Mozart / CC BY 2.0 and Ricky Romero / CC BY NC 2.0