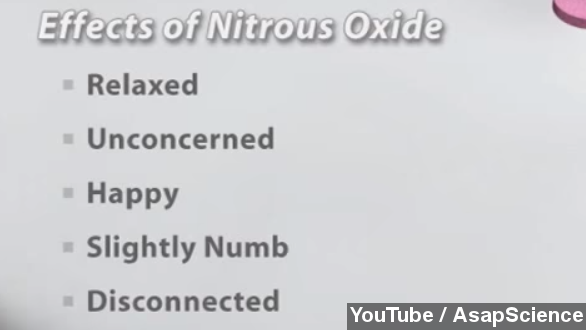 A new study is breathing life into the treatment of clinical depression where traditional medicines fail.

You might better recognize nitrous oxide by its more common name — laughing gas, the same stuff you might be given at your dentist's office for small procedures. (Video via YouTube / yellowpages)

The improvements found in patients were significant and rapid. Nitrous oxide reaches the brain in 20 seconds, and patients reported mood boosts within two hours.

Dr. Peter Nagele, an author of the study, was inspired by similar research that showed ketamine, a general anesthetic, could produce rapid depression-symptom improvement in patients. Ketamine works on the same brain receptor that nitrous oxide does.

But ketamine has to be injected, so laughing gas would reach the brain faster and would be painless to administer — great news for those afraid of needles.

However, if misused, nitrous oxide exposure can be fatal.

Most doctors' offices argue extreme adverse effects would be impossible, though, since administration is constantly monitored and dosage can be instantly changed. (Video via YouTube / Gentle Family Dentistry)

The need is high for relief of depression symptoms when common treatments aren't effective. (Video via YouTube / AsapScience)

"Depression's been called the 'common cold' of psychological disorders. Which is not to say that it isn't serious, but it's common and it's pervasive and it's the top reason people seek out mental health help." (Video via YouTube / CrashCourse)

Though this study's sample size was small, 20 patients, researchers hope to replicate the research in larger groups over longer periods of time. Three patients reported total depression symptom remission from the use of nitrous oxide.