Latino Early Voting Numbers In Swing States Are Way Up 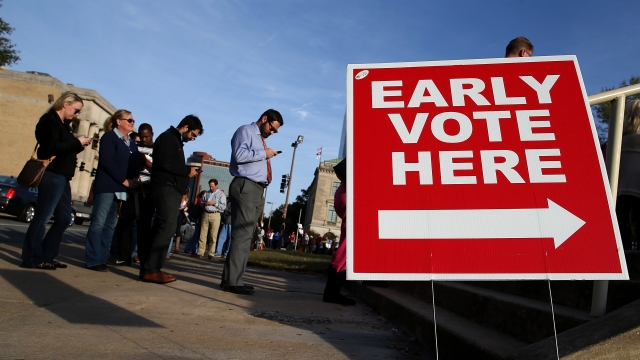 SMS
Latino Early Voting Numbers In Swing States Are Way Up
By Grant Suneson
By Grant Suneson
November 5, 2016
In states like North Carolina and Florida, early voting numbers for Latino voters are much higher than in the past two presidential elections.
SHOW TRANSCRIPT

As early voting numbers continue to trickle in, Latino voter turnout is way up so far, which could bode well for Hillary Clinton in several swing states.

In Florida, more than twice as many Latinos voted early this year compared to recent elections. North Carolina has a much smaller Latino electorate, but its 75 percent bump in early voting could be crucial in the tightly contested state.

SEE MORE: Hispanics In Florida Might Be Warming Up To Donald Trump

Obviously, not all Latinos are going to vote for Clinton, but a Pew poll last month found that those voters tend to prefer Clinton over Donald Trump by nearly 40 percentage points. Some Latino polling groups think the gap could be a lot bigger.

Trump's struggles to appeal to Latino voters are well-documented.

The negative backlash against Trump's comments about undocumented immigrants has seemed to drive so many people to register to vote that the practice has been dubbed "The Trump effect" or "El efecto Trump."

But until all the votes are counted, it will be tough to determine how much impact Latino voters really had. They're often underrepresented in polls because English-speaking pollsters can have a hard time getting responses from potential voters who speak only Spanish.