Turns Out Landing On Mars Is Still Pretty Tricky 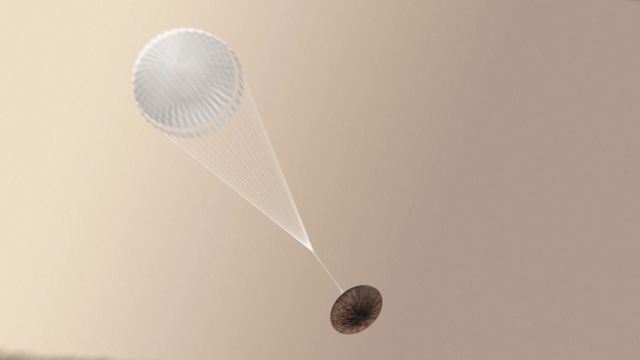 SMS
Turns Out Landing On Mars Is Still Pretty Tricky
By Matt Picht
By Matt Picht
October 19, 2016
The latest attempt to land on Mars appears to have failed.
SHOW TRANSCRIPT

Landing on Mars continues to be really hard. The latest attempt to touch down on the planet ended with the probe going offline — and it might not be coming back.

The Schiaparelli lander was supposed to test a landing system on Mars, as well as make a few observations on the planet's surface.

It's part of the ExoMars mission, a joint venture between the European Space Agency and Russia's Roscosmos.

The landing appeared to go mostly as planned up until the last minute of Schiaparelli's descent, when the probe dropped off the grid. Several attempts to get back in touch with the craft have all failed.

The overall mission's still a win: The orbiter that carried Schiaparelli to Mars is safely circling the planet. It's now studying Mars' atmosphere, looking for any trace gases that might indicate the planet was once habitable.

And Schiaparelli transmitted plenty of information during its descent. That data will be invaluable in planning the next attempted Mars landing in 2020.

To date, there have been seven successful missions on the surface of Mars —all from NASA.