Last Night's NFL Game Was A Nightmare For Colorblind Fans 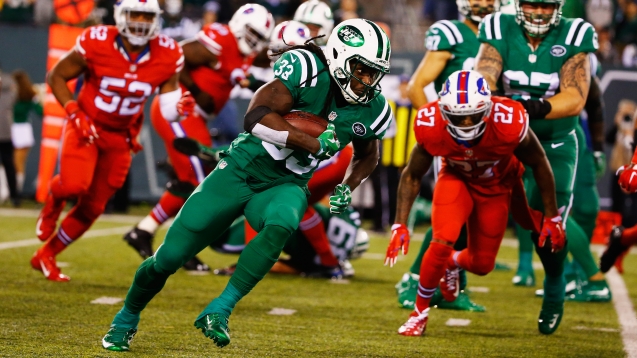 SMS
Last Night's NFL Game Was A Nightmare For Colorblind Fans
By Carter Woodiel
By Carter Woodiel
November 13, 2015
This week’s Thursday Night Football was an exciting one. But colorblind fans couldn't enjoy the game because they couldn't tell which team was which.
SHOW TRANSCRIPT

This week’s edition of Thursday Night Football was an exciting one for NFL fans. But some people watching couldn’t enjoy the game because they couldn’t tell which team was which.

The confusion comes from an unfortunate combination: special new uniforms and colorblindness.

You see, the NFL usually requires one team to wear white and another to wear their color for most games.

But on Thursday, the NFL was kicking off its new "Color Rush" campaign by having both teams suit up in special full-color Nike jerseys.

This week, the Bills wore bright red uniforms, and the Jets wore their trademark green. Though the uniform combo might have had fans thinking the game was Christmas-themed, most viewers didn’t have any trouble telling the teams apart. (Video via NFL)

Except for fans with red-green colorblindness, a condition affecting millions of Americans. It makes red and green look basically the same, meaning the game looked like all 22 players on the field were wearing the same jersey.

Fans and media members alike were sounding off on Twitter after the game started. A sports editor at the Associated Press called watching the game "torture."

The NFL is bringing Color Rush uniforms to three more games this year, with plans to expand the promotion during the 2016 season. (Video via NFL)

And the unis will be back next week, though, thankfully for colorblind fans, the red-green combo will be gone. Instead, it’ll be the Titans in blue and the Jaguars in all-gold.