A Major Newspaper Just Bucked The Trend And Endorsed Trump 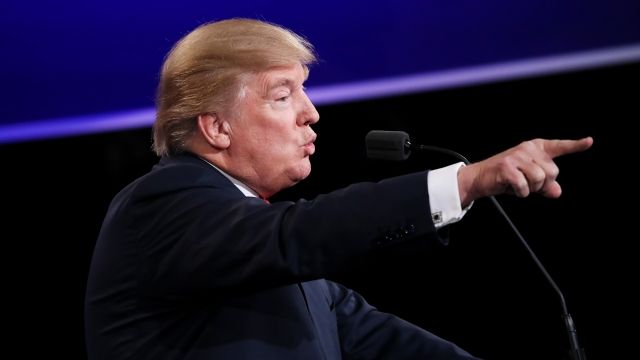 SMS
A Major Newspaper Just Bucked The Trend And Endorsed Trump
By Carter Woodiel
By Carter Woodiel
October 23, 2016
The Las Vegas Review-Journal is the biggest local paper so far to back the GOP nominee.
SHOW TRANSCRIPT

The Las Vegas Review-Journal endorsed Donald Trump on Saturday. It's the biggest local paper so far to declare support for the GOP nominee.

Worth noting — the paper is owned by billionaire GOP mega donor Sheldon Adelson, who also personally endorsed the Republican nominee earlier this year.

If you're scoring at home, Trump still trails Clinton by quite a bit in terms of newspaper endorsements. Clinton has over 80, while the Review-Journal is Trump's fourth (fifth if you count the National Enquirer).

Clinton's endorsements include plenty of conservative-leaning publications, like The Dallas Morning News, The Arizona Republic and The Cincinnati Enquirer.

Many of the conservative newspapers that broke Clinton's way took time to call out Trump specifically. The Dallas Morning News said Trump "bring[s] out the worst in all of us, rather than the best."

Even Gary Johnson has more newspaper endorsements than Trump, despite his position as a third-party nominee.

It's hard to say exactly how much newspaper endorsements matter to Trump, though.

Trump has repeatedly claimed the press is rigging the election in Clinton's favor, something his top advisers and vice presidential nominee Mike Pence have echoed.

"The American people are tired of the obvious bias in the national media; that's where this sense of a rigged election goes here," Pence said in an Oct. 16 interview with NBC.

In its endorsement, the Review-Journal specifically called out a growing frustration with today's politicians, saying Trump would be "a source of disruption and discomfort to the privileged, back-scratching political elites."