Las Vegas And Quebec City Bid For NHL Team; Seattle Is Out 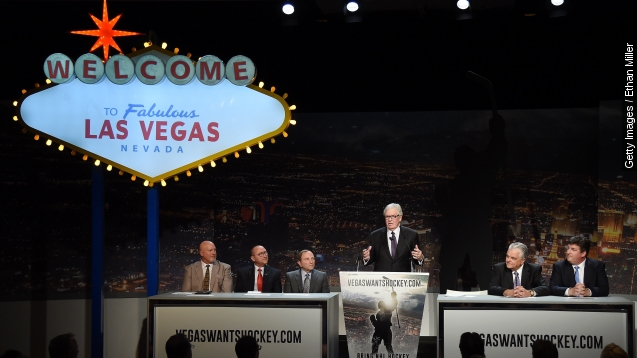 The NHL could soon be expanding after two cities submitted bids for a pro hockey team on Monday.

Neither comes as much of a surprise, as both groups have been vocal about bringing in an NHL team.

Communications company Quebecor Inc. is the group representing Quebec. Quebec City would be the NHL's most northeastern team. (Video via The National)

The city hasn't had an NHL team since 1995 when the Nordiques left to become the Colorado Avalanche.

While hockey's in Canada's blood, Las Vegas could be a challenge. The NHL's said before it's willing to bring a team to Sin City, even though other pro sports leagues have been wary. The warm climate and allure of the city's nightlife could be obstacles. (Video via Vegas Wants Hockey)

Regardless, billionaire Bill Foley submitted a bid on behalf of the city Monday.

"I've told people my goal is to bring a Stanley Cup to Las Vegas within eight years," Foley told KXNT.

The potential team already has a $375 million arena under construction, and more than 13,500 fans have made deposits on season tickets. (Video via KTNV)

One city noticeably absent from Monday's list is Seattle, which at one point had up to three groups vying to bring a team to the city.

Arena deals appear to be what caused them to drop out. The most likely reported group was led by Connecticut banker Ray Bartoszek, who will instead focus on building an arena just south of Seattle in Tukwila. (Video via KIRO)

"We start tonight by unfortunately waving a white flag. The opponents of the SoDo arena have won," KCPQ reports.

The group looking to build an arena in Seattle's SoDo area also hit a snag as a proposed deal reportedly called for a shared NBA-NHL team arena — one that would only happen if an NBA team was signed first.

The bid application required a $10 million fee — $2 million of which is nonrefundable. The NHL Board of Governors plans to meet in September and could vote on the next steps for Las Vegas and Quebec City.

This video includes images from Getty Images and Emmanuel Huybrechts / CC BY 2.0.