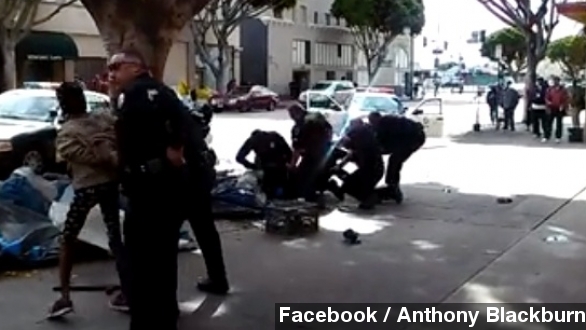 Los Angeles police shot and killed a man after an altercation Sunday in the city's downtown Skid Row area. A video of the dramatic incident was posted on Facebook shortly after. We warn you: the footage you're about to see is graphic.

The footage shows a group of officers tackle the man after he starts flailing his arms around. A Taser is fired twice and one officer is heard yelling, 'Drop the gun!' twice. The man was fatally shot while he was on the ground. Five shots can be heard in the video.

Multiple local outlets report the confrontation occurred when officers responded to a robbery call where the man was a suspect. Witnesses say he is homeless and identified him as Africa. (Video via KCAL)

According to the Los Angeles Times, one witness says police arrived when Africa was having an argument with another person inside his tent. They reportedly demanded he come out, but Africa refused, so "officers used the Taser on him and dragged him out."

"At least one less-than-lethal device, a Taser, was deployed. However, at this time, we do not know if that Taser did strike the suspect. After that, the struggle continued and an officer-involved shooting occurred," Sargent Barry Montgomery said.

Witnesses say police outnumbered Africa, and that they went too far when trying to apprehend him.

"Police never think about shooting the leg, shooting in the hip, in the ass, they always shoot to kill," one witness told KTLA.

"He didn't have no weapon. They just shot him. They could've just wrestled him down and, you know, took him to jail, but they shot him five times," one witness told KTTV.

Many of the people who occupy the Skid Row area suffer from mental health issues, and witnesses say that's one reason why the situation could've been handled differently.

Authorities are now interviewing witnesses to get as much information as possible about the deadly incident. They're also reviewing surveillance footage and trying to find out if Africa reached for a weapon or a Taser from one of the officers. (Video via KNBC)

KCBS obtained a statement from the Los Angeles Police Protective League that reads, in part: "LAPPL urges everyone to reserve their judgment as there is much to learn about the incident. In fact, audio heard on a video recording during the incident clearly suggests that the officers felt they were in life-threatening danger.”

Including Sunday's killing, the LA Times says there have been 12 officer-involved fatal shootings since 2000, with none last year and two in 2015.