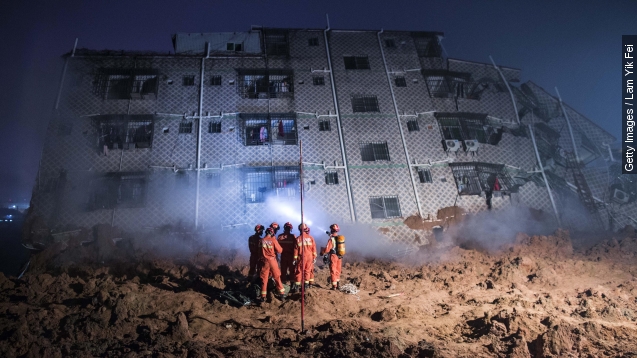 SMS
Landslide In China Leaves 59 Missing
By Ryan Biek
By Ryan Biek
December 20, 2015
State-run media suggests recent construction could be to blame for the landslide that caused several buildings to collapse.
SHOW TRANSCRIPT

At least 59 people are missing after a landslide Sunday caused several buildings to collapse at an industrial park in southern China.

Around 900 people were evacuated from the city, and most residents got out before the landslide hit. Four people have been found alive beneath the rubble. (Video via CCTV)

State-run media reports 100,000 square meters of land were smothered in soil. Close to 1,500 rescue workers are on the scene.

The cause of the landslide wasn't immediately clear, but local media suspects it may have been caused by recent construction work.