Land Mines Are Randomly Hidden All Over The Armenia-Azerbaijan Border 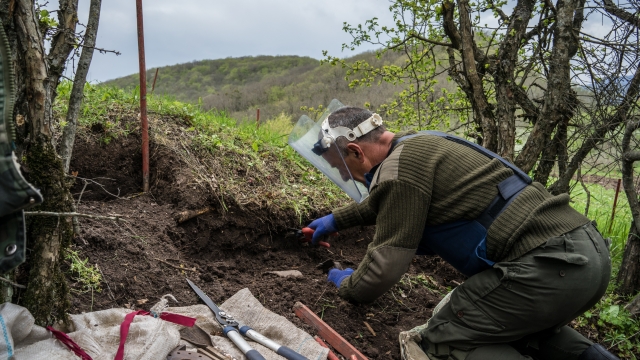 SMS
Land Mines Are Randomly Hidden All Over The Armenia-Azerbaijan Border
By Melissa Prax
By Melissa Prax
August 27, 2016
The explosives are remnants of the region's conflict from the '90s.
SHOW TRANSCRIPT

Hidden land mines are a part of daily life for for those living by the Armenia-Azerbaijan border.

"I found something unfamiliar in the field, I touched it, and it exploded in my hand and injured me. It was very hard. I couldn't do anything," Armenian Tovma Mkhitaryan said.

The land mines are a remnant of the Nagorno-Karabakh conflict in the '90s. Both sides used them as a military tactic.

And that's pretty common in other conflicts, too. Countries like Cambodia and Vietnam still have hidden, buried land mines forgotten post-war.

A land-mine monitoring group has put the death count in Azerbaijan, Armenia and the Nagorno-Karabakh region at over 500 with more 2,600 injured.

Getting all the land mines removed is tricky. There aren't really any maps that show where they're buried, and they weren't installed by professionals, which makes detonating them unpredictable.

"It will be free of mines one day. And if there's more funding available, we will make it free of mines even earlier," HALO Trust program manager Yuri Shahramanyan told BBC.

Various international efforts have been pretty effective at combing the land and offering assistance.

But as more time has gone on, the issue seems to get less attention.

Over the years, the land mines have trapped some residents — making it hard for them to get access to necessities or roads.

But some groups say the goal for a land-mine-free region is possible, even with recent clashes in the area after a cease-fire ended earlier this year.