Lance Armstrong On Doping: 'I'd Probably Do It Again' 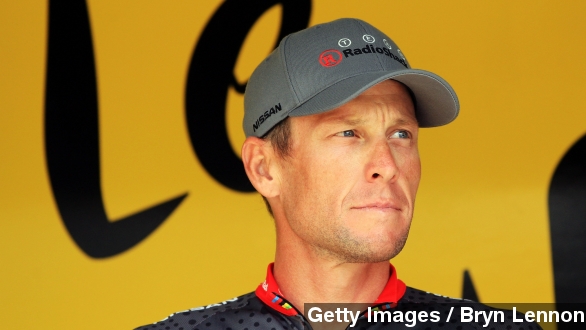 Monday, Lance Armstrong sat down with BBC for his first TV interview since admitting to taking performance-enhancing drugs.

The former pro cyclist says he wouldn't take any shortcuts if given the same opportunity now — but if you turned back the clock a couple decades, his answer wouldn't be the same.

"If you take me back to 1995 when it was completely and totally pervasive, I'd probably do it again. People don't like to hear that," Lance Armstrong said.

Armstrong also said he thinks his lifetime ban from professional cycling should be reduced, and that doping was a "bad decision" at an "imperfect time."

And that's something he's touched on before — claiming he raced in era where doping permeated the sport.

"It was just a messy time. It was basically an arms race, and we all played ball that way," Lance Armstrong told Outside Magazine.

And there's definitely some truth to that. According to The New York Times, "Since 1998, more than a third of the top finishers of the Tour de France have admitted to using performance-enhancing drugs in their careers or have been officially linked to doping."

Though that certainly doesn't get Armstrong off the hook, it does put things in perspective.
"The top twenty guys all tested positive for 'roids. Our roided up guy beat your roided up guy!" Comedian Bill Burr said.

But at least one writer wasn't sold on Armstrong latest confession.

"Armstrong is a false prophet and a symbol to nothing. His attempts at trying to clear his name are pathetic, especially with zero regret and remorse for lying to everyone and making so much money off of them while doing so."

During the peak of his career, Armstrong was considered by many to be the greatest cyclist ever. But that all changed after the doping scandal tarnished his legacy.

"Did you ever take banned substances to enhance your cycling performance?" Oprah Winfrey asked.

In 2012, Armstrong was banned from professional cycling for life after coming clean following years of denial.

The shamed cyclist was also stripped of his record seven Tour de France titles he won from 1999 to 2005.

Since then, Armstrong admits it's been a tough road to clean up his image, but he hopes "there's some light at the end of the tunnel."