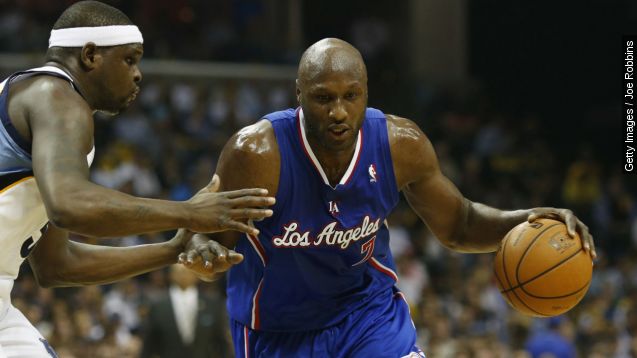 Former NBA player Lamar Odom has been hospitalized after being found unconscious at a Nevada brothel.

Odom was reportedly stabilized at a local hospital then taken to Sunrise Hospital in Las Vegas. No information is available yet on what's caused Odom's condition and his condition has not been confirmed.

But E! reports Odom is still unconscious and the "prognosis does not look good."

As of 11 p.m. Pacific time Tuesday, TMZ reported the former basketball star's heart was failing and he was struggling with properly functioning kidneys and lungs.

An insider told E! the star was taking herbal Viagra while at the brothel, though no illicit drugs were found in his room. Brothels are legal in the state of Nevada. (Video via E! / "Keeping Up With The Kardashians")

Odom and Khloe Kardashian were married for four years before splitting in 2013. Odom was later arrested for driving under the influence after refusing to take a chemical sobriety test. He checked into rehab shortly after. (Video via E! / "Keeping Up With The Kardashians")

Khloe, who reportedly traveled to Nevada with sister Kim and mom Kris Jenner, has always made it clear that she still cares about Odom. Though it was largely believed that their divorce was finalized in July, E! reports the judge never signed off on the divorce. This means Khloe potentially has power of attorney over the situation.

"I'm really on high alert for Lamar because anything will set him to spiral, and that's kind of the last thing I want for him," she said on an episode of "Keeping up With the Kardashians" that aired earlier this month.

Though the Kardashians have not issued an official statement regarding Odom's health, Kendall Jenner tweeted a heartfelt message, presumably about Odom, saying, "Please don’t go."

According to Hollywood Life, Odom's father said "somebody drugged my son." He also pleaded with Khloe to reach out with any information she has.

Some of Odom's fellow NBA players are also tweeting their support.

New York Daily News reports Kobe Bryant was spotted entering the hospital after leaving early from the Lakers preseason game against the Sacramento Kings, which took place at the MGM Hotel in Las Vegas.