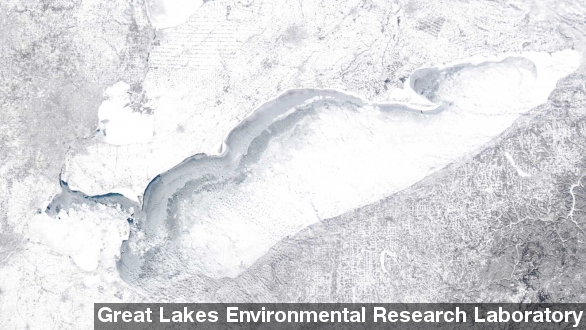 SMS
Lake Erie Is Almost Completely Frozen Over
By Katherine Biek
By Katherine Biek
February 19, 2015
Ice stretches across more than 94 percent of Lake Erie. The last time it was entirely ice-covered was nearly two decades ago.
SHOW TRANSCRIPT

WEWS reports more than 94 percent of the water in the Great Lake is currently frozen.

The Great Lakes Environmental Research Laboratory, run by the National Oceanic and Atmospheric Administration, reports the ice coverage has been a recent development. There was little to no ice covering the lake back in January.

Ice coverage across the Great Lakes has been monitored since the early 1970s, and if Lake Erie freezes completely this year, it will be only the fourth time it's happened.

Still, Cleveland.com reports Lake Erie was even more frozen this time last year. It was 95.6 percent ice then.

But the current ice coverage is predicted to increase. Cold weather hitting the Northeast isn't expected to let up any time soon.

In fact, an MLive.com meteorologist says all five Great Lakes could be completely frozen in just a few days. On Tuesday night, ice formed over about 4,750 square miles on the lakes.

According to the National Weather Service, the current water temperature for Lake Erie is 32 degrees. That's the exact temperature at which water begins crystalizing into ice.

And all this ice isn't good for the fish. A blogger for Lake Scientist reported in 2014 that when snow falls into lake water, it sinks to the bottom and can kill plant life. And when those plants die, some oxygen is removed from the water, causing fish to die.

The last time Lake Erie was completely covered in ice was back in 1996.