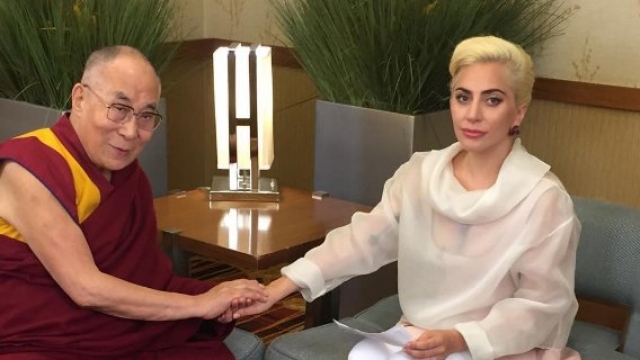 SMS
Lady Gaga's Meeting With The Dalai Lama Got Her Banned In China
By Ryan Biek
By Ryan Biek
June 28, 2016
She is arguably the most popular Western musician in mainland China.
SHOW TRANSCRIPT

A meeting with the Dalai Lama and a few pics on social media might've cost Lady Gaga her stardom in China.

The pop star met with the leader of the Buddhist faith on Sunday while he was speaking in Indiana.

Leading up to this, she was arguably the most popular Western musician in mainland China. But after she shared photos of herself and the Dalai Lama on Instagram, her account was flooded with negative comments.

One user posted, "The way the Chinese feel is just like you were shaking hands with [Osama] bin Laden." Another wrote, "This is proof that she can love and respect a Chinese terrorist. She fundamentally looks down on Chinese fans, and even all Chinese people."

A day after the meeting, the Communist party banned all of Lady Gaga's music in mainland China. The singer herself has also been barred from the country.

In 1959, the Dalai Lama fled the Chinese region of Tibet after a failed uprising against the Communist party. The government still considers him a separatist who is aiming to break Tibet away from China.

Lady Gaga joins other Western celebrities like Richard Gere, Bon Jovi, Maroon 5 and Selena Gomez, who've all had concerts, appearances or their work banned because of interactions with the Dalai Lama.

But the apparent negative reaction to Lady Gaga's meeting may be a little skewed. As the BBC notes, several users who shared Gaga's posts were censored, and many had to get around a Chinese firewall to find out why Gaga met with the spiritual leader.

Plus, Lady Gaga's music has been banned before. Only the last time, the Chinese government banned her material because it had deemed her too risqué, not a political adversary.