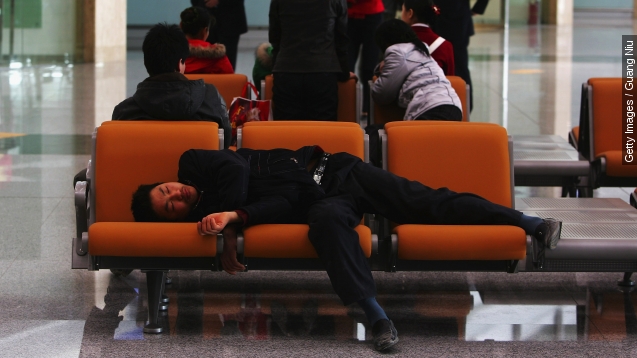 SMS
Lack Of Sleep Could Increase Cancer Risk, Weight Gain
By Matt Moreno
By Matt Moreno
November 2, 2015
Getting less than eight hours of sleep every night can have drastic effects on your health.
SHOW TRANSCRIPT

Many Americans don't get enough sleep, and researchers say that could increase the risk for health problems, including weight gain and cancer.

"Lack of sleep can hinder the ability to fight cancer by altering the actions of cortisol and melatonin, two hormones which could influence the behavior of cancer cells," Dr. Larry Altshuler explains.

On Monday, ABC's "Good Morning America" looked at those claims and more regarding the health effects of sleep deprivation. (Video via Vanderbilt University Medical Center)

"Our brain actually makes more ghrelin. ... This is the 'go' hormone. It drives us to eat. Leptin, which is the satiety hormone that tells us, 'Whoa, I've had enough; I'm not that hungry'  — there's less of it," Dr. Jennifer Ashton said.

In one study ABC looked at, participants restricted their calorie intakes and slept for either five or eight hours.

Lack of sleep is linked to more and more health problems, but year after year, Americans tend to prioritize other things over the recommended eight hours.

The Centers for Disease Control and Prevention even called insufficient sleep a "public health problem."

According to the National Sleep Foundation, adults 18 to 64 years old should get seven to nine hours of sleep a night.