This Record-Setting Building In LA Is Really, Really Tall 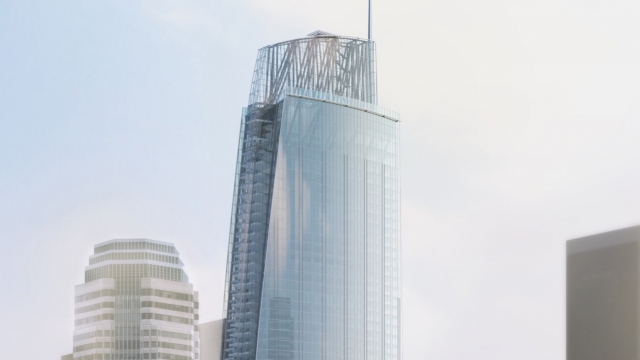 SMS
This Record-Setting Building In LA Is Really, Really Tall
By Lindsey Pulse
By Lindsey Pulse
September 4, 2016
The Wilshire Grand tower is now the tallest building in the Western U.S.
SHOW TRANSCRIPT

Los Angeles is the city of angels and celebrities. Now, it can add home of the tallest building in the western U.S. to that list.

"Oh my god, it's unbelievable, all of a sudden I think I'm in New York," said Bob Downey, a man who worked on L.A.'s original skyline in the 1970s.

The Wilshire Grand tower project began in 2012. The final touch to the 73-story building? A 10-ton spire.

And that spire helped set a record. The steel object put the tower at 1,100 feet, making it the tallest building west of the Mississippi River.

SEE MORE: China's New Glass-Bottom Bridge Is Not For The Faint Of Heart

The second tallest building on this side of the map is the U.S. Bank Tower, which also has 73 floors but is shorter and doesn't have a pointy thing at the top.

The Wilshire Grand will reportedly be home to multiple entities. Part of it will be a hotel, another part will house offices, and the remaining floors will have various restaurants and bars.

CBS Los Angeles reports the building's architect didn't actually have record breaking in mind when he designed the skyscraper.

Construction isn't quite done. The $1 billion tower is reportedly scheduled to open in March 2017.