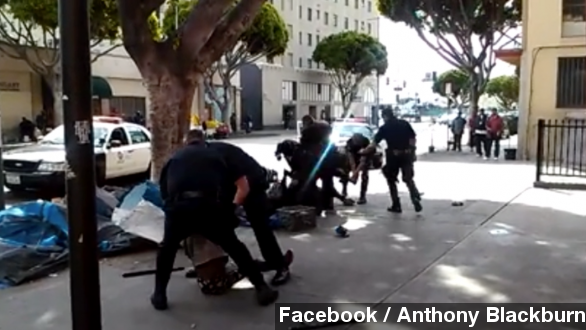 "While on the ground and struggling with the officers, the man forcibly grabbed one of the officer's holstered pistols, resulting in an officer-involved shooting," Los Angeles Police Chief Charlie Beck said Monday night during a press conference.

Footage posted on social media and later taken down shows a struggle and someone shouting "Drop the gun!" multiple times seconds before five shots ring out.

During the conference, police showed a photo of what they say is the victim reaching for an officer's gun. They also showed photos of the officer's gun as proof there was a struggle over it. (Video via CBS)

Still, critics say it's not as clear-cut as that, and the ACLU has called on the LAPD to conduct a transparent investigation, specifically by calling for the quick release of any body camera footage. (Video via Taser International)

The LAPD is rolling out a plan to equip 7,000 of its officers with body cameras. It started Jan. 1 by equipping 800 officers with cameras and plans to use more as more funding becomes available. (Video via KABC)

General Dogon, a civil rights organizer for the Los Angeles Community Action Network, told The Wall Street Journal the shooting highlights the need for officers to appear in plain clothes rather than uniforms when dealing with the homeless or mentally ill.

The LAPD has teams to do just that, called "System-wide Mental Assessment Response Teams," but, according to Dogon, they're rarely called out to defuse situations such as the one on Sunday.

During Monday night's press conference, LAPD Chief Charlie Beck said it was on the communities to take care of their homeless and mentally ill residents instead of putting them on the street. (Video via KTTV)

The LAPD is still investigating the shooting, and all four officers involved have been put on paid leave. Police Chief Beck has said body camera footage would not be released while the investigation is ongoing.