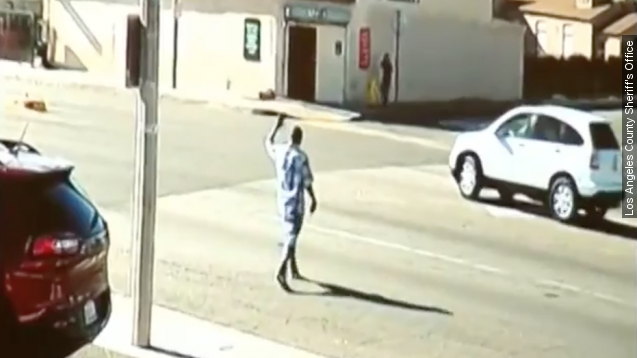 The Los Angeles County Sheriff's Office says it's investigating a shooting in which two deputies shot and killed a suspect as he moved away from them.

A cellphone video appears to show two deputies shooting an armed man in the back and continuing to fire dozens of times as the man attempts to crawl away. The man's family identified him as 28-year-old Nicholas Robertson. He died at the scene.

The sheriff's office says the deputies were responding to calls saying shots had been fired. The office added that the suspect refused orders to drop his gun.

The sheriff's office also claims witnesses said they felt threatened and that the man turned his gun toward deputies before they opened fire.

"Public safety was critical here with a suspect who's armed in a highly populated area," Captain Steve Katz said during a press conference.

Robertson's family and friends protested his death Saturday, saying the deputies could have used non-lethal force. (Video via KNBC)

The two deputies have been reassigned as the investigation continues.