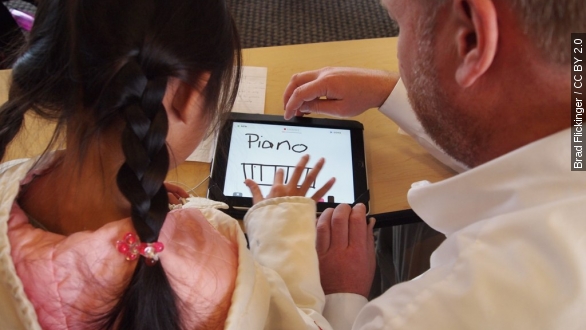 According to KPCC, a California public radio station, the Los Angeles Unified School District wants a refund for the multimillion-dollar program that would have given each of the district’s students — a whopping 650,000 — an iPad.

The devices were slowly rolling out to students across the district. As part of this program, each iPad came loaded with software from educational company Pearson. (YouTube / Pearson)

It’s that software in particular that seems to have the district looking for a refund.

KPCC quotes a district board member who said, "Pearson just wasn’t working out for them. We paid a lot of money for that curriculum … I think it's imperative that Pearson [...] step up and fix the curriculum, or give us back our money so we can buy curriculum that does work."

So if it’s Pearson’s software that “just wasn’t working,” you might be wondering why Apple’s involved in the situation.

Well, according to the Los Angeles Times, Pearson worked as a subcontractor for Apple: "A three-year license to use the curriculum added about $200 to the $768 cost of each iPad."

So if the district wants its money back, it has to go after the big fish — not the small one.

The L.A. district's iPad-in-every-hand program has been fraught with issues since its inception. According to Ars Technica, it only took a month for students to start removing browsing restrictions placed on the iPads.

That was followed by an FBI investigation into the program, as there was suspicion Apple and Pearson were favored over other companies bidding for the device-in-every-hand deal.

At time of writing, Apple and Pearson had yet to respond to the complaint, but it appears the L.A. school district is prepared to go to court if a refund isn't given.

This video includes images from Getty Images and Brad Flickinger / CC BY 2.0 and music from Profi 70s by Pierlo / CC BY 3.0.